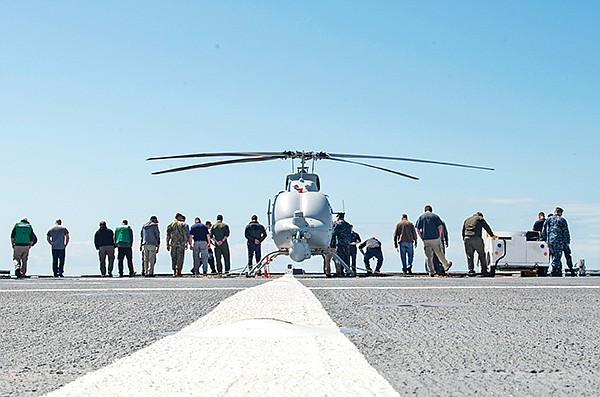 Sailors and Northrop Grumman employees walk the flight deck of the USS Montgomery looking for debris during the first test of the MQ-8C Fire Scout in March 2018. The Montgomery is a Littoral Combat Ship based in San Diego. Photo by Mass Communication Specialist 3rd Class Zachary Eshleman, courtesy of U.S. Navy

Rancho Bernardo is home base for Northrop Grumman’s unmanned and autonomous aircraft programs. One-third of the new Navy contract funds will be spent in the San Diego region. Work is expected to continue through summer 2021. The Naval Air Systems Command at Patuxent River, Maryland, awarded the deal.

The Navy operates the Fire Scout from its growing fleet of Littoral Combat Ships. The MQ-8C is the larger of two Fire Scout models. It has a range of 1,200 nautical miles and can stay aloft for as long as 12 hours, carrying payloads of 300 to 500 pounds.

Northrop Grumman (NYSE: NOC) is based in Virginia and has diverse businesses in San Diego. In Carmel Mountain Ranch, it produces radios for F-35 Lightning II Joint Strike Fighters.