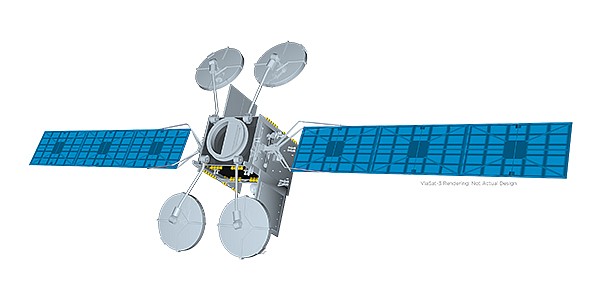 Commercial Networks had the largest growth of the three: 129 percent to $127 million.

The Carlsbad corporation reported a net loss of $10.4 million, or 17 cents per share, on total revenues of $554.7 million during the quarter — the third of fiscal 2019. (Yes, fiscal 2019 ends on March 31.) Overall, revenue grew 45 percent over the same quarter one year ago. Meanwhile, Viasat cut its net loss 58 percent.

Viasat (Nasdaq: VSAT) also announced it had reached an agreement with Boeing Satellite Systems International for construction of its third ViaSat-3 satellite, planned to serve the Asia Pacific region. Two other satellites in the ViaSat-3 constellation are now under construction. Together, they will offer virtually global coverage.

Though Viasat has said its first ViaSat-3 launch will be in 2020, B. Riley FBR analyst Mike Crawford said in a Feb. 8 note that the more likely date is early 2021, because of a “probability distribution shift” in various project phases.

Back to the numbers: Analysts who were focused on non-GAAP financial results — which excluded $20 million of stock-based compensation, as well as income taxes and amortization — were happy to see non-GAAP earnings per share of 12 cents. (GAAP is the abbreviation for Generally Accepted Accounting Principles.) Collectively, the analysts who cover Viasat stock expected a net loss of 10 cents per share on a revenue prediction of $491 million — not as optimistic as the $555 million Viasat turned in.

Among the pleased analysts was Richard Valera with Needham & Co. LLC, who also commented favorably on a 41.5 percent margin on satellite services revenue.

“We are continuing to execute on our objective of converting prior growth investments in advanced networking capabilities, aviation type approvals, new geographic markets and the ViaSat-2 satellite and network infrastructure into strong revenue and Adjusted EBITDA gains in fiscal year 2019 and beyond,” Viasat Chairman and CEO Mark Dankberg said in a prepared statement. EBITDA stands for Earnings Before Interest, Taxes, Depreciation and Amortization.

Viasat reported its financial results on Feb. 7. In the third quarter of the previous fiscal year, Viasat reported a net loss of $24.6 million, or 42 cents per share, on total revenues of $381.8 million.

Also on Feb. 7, Viasat reported a contract extension with United Airlines, which will bring Viasat’s in-flight entertainment and connectivity system to 34 new Airbus A319 aircraft.