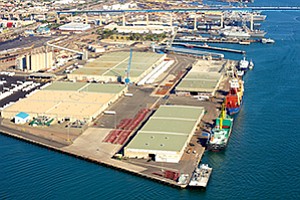 As part of a decades-long plan to modernize the 10th Avenue Marine Terminal, the Port of San Diego is proposing to demolish the two warehouses closest to where the ships are berthed. Photo by Port of San Diego

The Port of San Diego and the Board of Port Commissioners has awarded nearly $8 million to San Marcos-headquartered Dick Miller, Inc., for the demolition of a second transit shed as part of the first phase of the Port’s Tenth Avenue Marine Terminal Redevelopment Project. This will include the demolition and disposing of a second transit shed, rail and stormwater improvements and new pavement.

In October 2017, Dick Miller was also awarded the demolition contract of another transit shed for $12.3 million, with an anticipated completion date of March 2019.

Construction on the second shed is set to begin April and slated to be completed in a year.