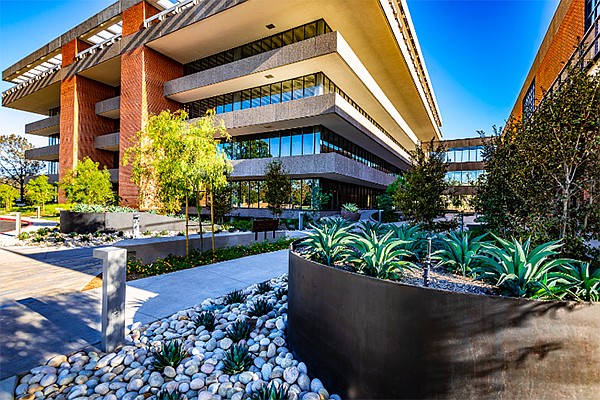 Ampersand, the renovated former campus of the San Diego Union-Tribune in Mission Valley, is among office space leasing in 2018 and 2019. Photo courtesy of La Jolla Visions/Javier Laos

Demand for office space cooled in San Diego County for the fourth quarter of 2018 but the outlook for 2019 is favorable, according to commercial real estate brokers, while demand for industrial space finished the year on a mixed note.

“A slight bump in an otherwise overwhelmingly positive year,” was how CBRE saw the end of the year for industrial real estate.

“I don’t think this is a sign of a doomsday to come,” said Sean Williams, a senior vice president with CBRE.

“I think that in 2019, things are going to flatten out a little, but there’s some significant transactions out there,” Williams said. “If you build functional product with good truck access and clear height and sprinklers and those kind of things, people will come.”

Concern that the economy may be heading into a downturn is causing some industrial investors to be cautious, Williams said, but he said any slowdown would likely be modified by the continued growth of e-commerce.

Despite what it said was a tepid fourth quarter, CBRE reported that 2018 in general was a good year for industrial real estate in San Diego County.

Cushman & Wakefield presented an even rosier picture for industrial real estate, reporting that the average asking rate for rent reached an all-time high at $1.11 per square foot compared with $1.03 a year ago.

“The fourth quarter marked San Diego’s 29th of the last 30 quarters to report occupancy growth. Only the second quarter of 2017 had reported a loss during this long stretch,” Campion said. “Further, compared to the fourth quarter move-ins, which consisted of organic expansions as well as pre-leased new construction, the quarter’s move outs were minimal.”

Cushman & Wakefield was a little less exuberant about the county’s market for office space, reporting that “San Diego’s office market ended 2018 on a bit of a flat note.”

Still, the firm noted that leasing activity across all key industries “remains robust.”

The fourth quarter “is likely just an isolated case,” according to Cushman & Wakefield.

Brian Starck, managing director of Cushman & Wakefield in San Diego, said that Sorrento Mesa was especially resilient in office leasing activity in 2018, and predicted it would remain a strong submarket in 2019.

The vacancy rate in Sorrento Mesa was running at around 18 percent in 2018, caused in part by Qualcomm giving up space, but Starck said he expected the vacancy rate to drop to about 12 percent by the second quarter of 2019.

UTC also was a top performer for office product, Starck said, with Apple’s lease of more than 96,000 square feet of space in Eastgate Terrace among the standout transactions.

“Leasing activity cooled a bit in the fourth quarter, but was within range of historical averages,” Savills Studley reported. “With very negligible construction activity, even slightly subpar leasing volume has drawn down availability in spots.”

The firm said there was a burst of office leasing activity in the third quarter that dropped slightly in the final three months of the year.

Still, Savills Studley said that sales of office property topped $2.5 billion for the first 11 months of 2018, a 14.2 percent increase compared to the same period in 2017.