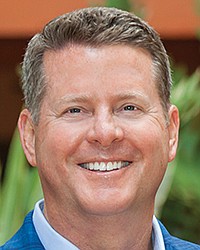 Paul Hering is the West Region chief executive officer of Marsh & McLennan Agency and is responsible for setting strategy and managing operations for the western U.S. region. His recent accomplishments include leading continued double-digit growth of a region with 700 employees and nearly $200 million in revenue. Hering joined Barney & Barney in 1985; the firm merged with Marsh & McLennan in 2014. Hering is transitioning to a new role as Chairman of the West Region effective January 2019. He recently received a Lifetime Achievement Award from Big Brothers Big Sisters of San Diego.

He will be the 2019 President of San Diego Bowl Game Association.