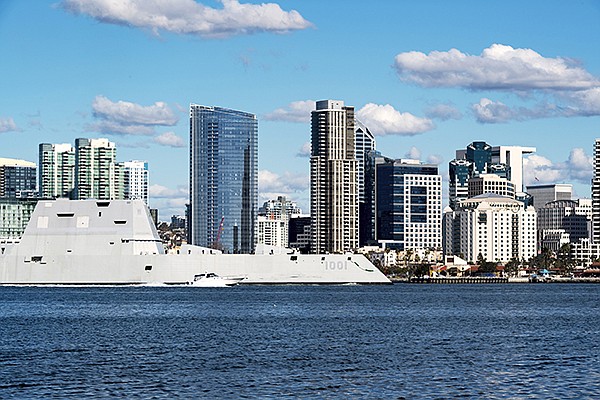 The ship known as DDG 1001 passes the San Diego waterfront on Dec. 7. It was commissioned as the USS Michael Monsoor on Jan. 26. Photo by Mass Communication Specialist 2nd Class Jasen Moreno-Garcia courtesy of U.S. Navy

The U.S. Navy commissioned its futuristic Zumwalt-class destroyer, the USS Michael Monsoor, with traditional ceremonies that included a 19-gun salute in late January.

The public ceremonies in Coronado stand in contrast to more private business activities across the bay in a Barrio Logan shipyard, or in offices where engineers fine-tune ships’ software.

BAE Systems San Diego Ship Repair, on the waterfront where Sampson Street crosses Belt Street, has a contract to do post-construction work on the two Zumwalt-class destroyers in the harbor. Initially valued at $10.3 million when awarded in late 2016, the deal could swell to a maximum value of $193 million through 2021. As part of the indefinite-quantity deal, BAE will install combat systems.

The Monsoor is the second of three Zumwalt-class destroyers, which are designed to be stealthy. On radar, the 610-foot, 15,700-ton ships reportedly have the profile of a fishing vessel.

A different branch of BAE Systems, the Weapons Systems business, has the contract for the ship’s 155mm (6.2-inch) guns. There is no official word on what the guns might shoot. The U.S. Naval Institute, a publisher not affiliated with the government, reported in January that the Navy is still thinking about the matter. An original plan to use custom, rocket-assisted rounds was shelved after the cost of those rounds rose to nearly $1 million apiece.

BAE Systems is based in the United Kingdom.

The Navy sends millions of dollars to Raytheon in San Diego to improve the Zumwalt ships’ software. When it awarded a nine-month contract in fall 2017, $6.8 million worth of the work was slated to be done locally. More recently, $20 million of a nine-month software contract awarded in December was designated to flow to San Diego. Part of the latter is R&D funding.

The lead ship of the class, the USS Zumwalt, is also based in San Diego.

Michael Monsoor was a U.S. Navy SEAL who died in combat in Ramadi, Iraq, in 2006. Monsoor received the Medal of Honor posthumously.