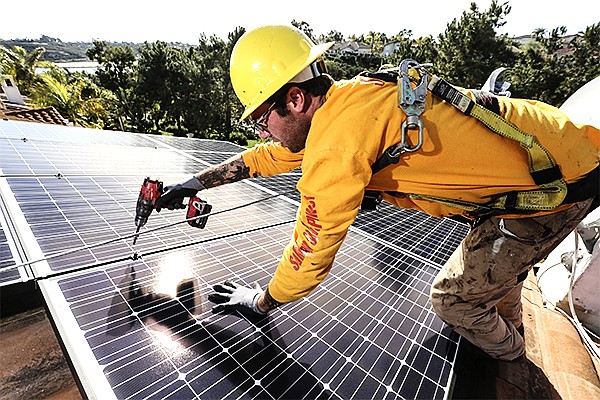 Sullivan Solar Power employee Jonathan Rogers installs solar panels atop a home in Carlsbad. California will require solar panels on all new homes starting in 2020. The mandate was approved by the California Energy Commission in 2018 as part of an update to the panel’s energy efficiency standards, which are revisited every three years. Photo by Jamie Scott Lytle. 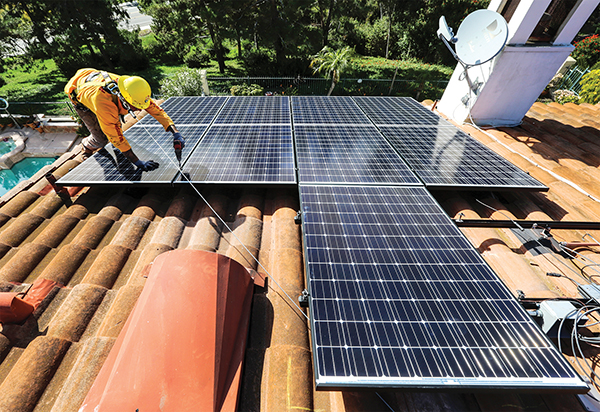 A state mandate to include solar panels on all new homes built in California starting in 2020 is expected to boost the bottom line of companies that install solar energy systems on the rooftops of homes throughout Southern California.

Mike Teresso, president of Escondido-based Baker Electric Home Energy, said most of his company’s business currently focuses on retrofitting solar panels on the roofs of existing homes. The new mandate, he said, “opens up another market segment for us to pursue. That’s a positive for us.”

The same is true for Sullivan Solar Power, which currently focuses on retrofits for existing homes, as well as commercial solar installations. CEO Daniel Sullivan said his company will create a new division to handle new home installations once the mandate takes effect.

“We see this as yet another opportunity. We will end up hiring more people to meet the demand,” Sullivan said. He also predicted that once the public sees solar panels being installed on new homes, the demand for solar on existing homes will also increase.

“This is going to virally spread the solar industry,” he said.

California Mandate Is a First

The mandate was approved by the California Energy Commission in 2018 as part of an update to the panel’s energy efficiency standards, which are revisited every three years. California is the first state to adopt such a directive. Along with single family homes, the mandate requires solar panels for multifamily dwellings of three stories or less. Builders also can reduce the size of the photovoltaic systems they install if they include storage batteries in their homes.

The commission has estimated that a solar energy system of 2.5 to 3 kilowatts will add about $8,400 to the cost of a new home. The commission’s 2019 energy efficiency standards, which include other measures such as improved insulation, will total about $9,500 for a new home, while saving homeowners $19,000 in energy and maintenance costs over the 30-year life of their mortgage.

That translates into $40 per month extra on a typical home mortgage payment, and an $80 per month savings, for net savings of $40 per month, according to commission estimates.

Lynn Reaser, chief economist with the Fermanian Business & Economic Institute at Point Loma Nazarene University, said she has not conducted in-depth research on the impact of the new state solar mandate on the housing market. “However, any regulation that raises the cost of housing will only exacerbate the housing affordability problem that already is San Diego’s most pressing problem,” she wrote in an email.

A National Association of Home Builders study said that in California, for every $1,000 increase in the cost of a median-priced, newly-built home, 9,897 households would be pushed out of the market, and unable to qualify for a mortgage.

“These high energy-efficient and solar-powered homes will save families money on energy bills from the moment they walk through the front door,” Davis said.

While the new standards will give a boost to the solar energy industry, California still has a long way to go in terms of transitioning to home solar generation. Davis said the Golden State is on track to see its one-millionth home solar power system installed in March, out of a total of 14.2 million homes throughout the state.

In San Diego Gas & Electric’s territory, 144,553 homes have solar panels, or about 10 percent of the utility’s residential customers, according to a company spokesman.

While California’s home-building industry is leery of any laws that increase the cost of a new home, a key industry group, the California Building Industry Association, supports the new solar mandate because the group negotiated four options to meet the updated energy efficiency standards, said Bob Raymer, technical director of the association.

The first option is installing a solar energy system on the home’s roof, which is then owned by the homebuyer. Two other options are: a solar lease and power purchase agreement, in which the solar panels are owned by a third party and homebuyers face no upfront costs for the system.

The fourth option, said Raymer, is a community solar option, in which a solar farm is owned and operated by an entity that could be the builder, a private company, a utility or a government agency such as a city or county. The upfront cost per home would average around $1,200, compared with $8,400 for a single home solar energy system.

One public utility, the Sacramento Municipal Utility District or SMUD, has built one solar farm and is working on a plan to build another. SMUD is seeking certification of its project from the energy commission, which would allow the power it generates to satisfy the new home solar mandate, Raymer said.

“One of the reasons we like this option so much... it is a lot cheaper for someone to build a 100-kilowatt plant offsite, than it is to build 50 2-kilowatt systems...” on the rooftops of new homes, Raymer said.

Raymer said his group is working with state regulators to allow investor-owned utilities, such as SDG&E and Southern California Edison, to operate community solar systems along with public utilities such as SMUD.

“We hope this gives (investor-owned utilities) the option of continuing to be the electric utility in this new green world we are moving to. I have to believe the utilities are going to like that,” Raymer said.

According to data from the California Homebuilding Foundation, some 67,000 single family homes are expected to be built in California in 2020, along with 47,000 units of multifamily housing that are three stories or less, said Davis. However, the projects won’t fall under the new solar mandate if applications for building permits are submitted before the end of the year.

Teresso, of Baker Electric Home Energy, said he hopes his company will install several hundred photovoltaic systems on new homes in 2020. And Sullivan, of Sullivan Solar Power, anticipates installing 100 to 150 systems on new homes during the first year of the mandate. Those numbers are on top of the retrofit business already handled by both companies.

Both Baker and Sullivan do solar installations in Riverside and Orange counties, as well as their home bases in San Diego County. Baker Electric Home Energy, a sister company to Baker Electric, has 230 employees, and Sullivan employs more than 100. Each anticipates hiring workers as the new mandate takes effect in 2020 and their workload increases.

“We’re probably the best place in the country to (install solar),” said Teresso. “We’re very sunny and we have very, very high utility rates, often the highest in the country, so the return on investment for customers is probably better than anywhere else.”

See More: Education Is One of the Tools Solar Company Relies On