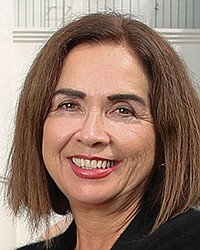 Newly minted San Diego State President Adela de la Torre shattered ground this past summer with her appointment as the first woman and the first Latina to be named the century-old university’s permanent president. She came to San Diego County from Northern California, where she was previously vice chancellor for student affairs at UC Davis. In her new role, de la Torre is responsible for an institution with around 34,000 students and a budget of about $900 million.

She has a Ph.D in agricultural and resource economics.