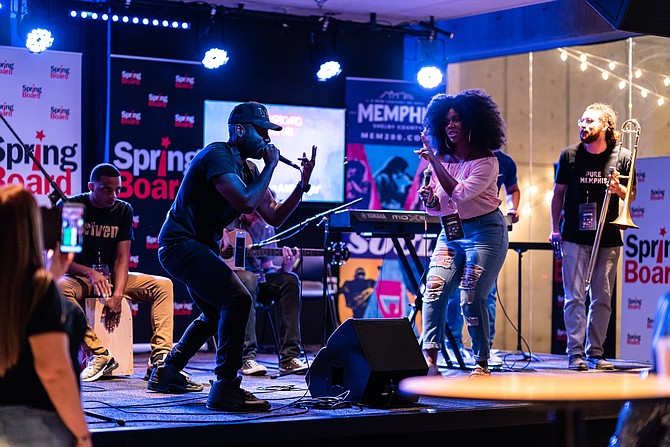 SpringBoard West is expected to bring in 40 emerging artists from around the country to San Diego from Jan. 9 to Jan. 11. Photo courtesy of SpringBoard Music Festival.

SpringBoard West music fest, founded in 2012 and which takes place annually in Ocean Beach, is expected to bring in 40 emerging artists from around the country to San Diego from Jan. 9 to Jan. 11. The three-day music discovery conference and festival is projected to have a total economic impact of $753,400 in a span of four years, according to the company.

Founder Barry Coffing said he was inspired to launch the event to better cater to up-and-coming artists and the indie music industry altogether.

“I grew up in Texas and my band was invited to the second South by Southwest (festival),” he said. “As the years passed, the events seemed to drift from being about the artists and the industry to being about Austin and the advertisers. I felt like we needed an event that went back to support the needs of the industry and artists. The final part was to invite the fans to see bands that are not only performing for the crowd, but for the labels, managers and agents.”

The festival, which started in Houston, Texas, before kicking off SpringBoard West in San Diego and also SpringBoard Memphis, brings in 40 bands and solo artists to town to participate in two days of “Band Bootcamp” with some of the industry’s most successful mentors, said Coffing. In the past, this has included the likes of singer-songwriter Paul McCartney’s sister, Ruth McCartney, rock band Guns N’ Roses former manager, Vicky Hamilton and music artist Beyonce’s dad, Mathew Knowles.

The third day is closed out by inviting the community out to discover music from all 40 acts, said Coffing, who perform on four stages in Ocean Beach during what SpringBoard West calls the “Band & Brew Crawl”. Local spots like Winstons Beach Club, The Holding Company, The Harp and Ocean Beach Brewery all participate. There is also a VIP beer tasting that takes place before the performances, Coffing said, during which, for $20, guests can try SpringBoard West’s collaborative beer from several local breweries.

To fund SpringBoard West, Coffing said he first created a nonprofit that was dedicated to teaching music artists how to be professional and earn a living. Lately, the festival is funded through a combination of sponsorship, ticket sales, community support and personal funding from Coffing and his family members, he said. All proceeds benefit SpringBoard’s nonprofit partners: Sustainable Artists, San Diego Music Foundation, Autism Tree Project Foundation and Pioneer Programs Insurance Solutions.

Coffing said SpringBoard currently receives between 2,000 and 3,000 applications per event and that this SpringBoard West festival will kick off the organization’s best year to date.

“We expect to directly help by showcasing 200-plus bands to the industry,” he said, “expand our Band Bootcamp days and locations to educate 600 artists and their supporters, bring in a network with 120 industry experts (and) generate revenue for 8-12 other nonprofits.”

Starting in San Diego this year, SpringBoard West will be adding a local Band Bootcamp in partnership with the San Diego Music Foundation, said Coffing. He also said that SpringBoard Festivals, which currently take place three times a year, will continue to host its annual event in San Diego and Memphis in 2020 and will either host again at its flagship location of Houston or move to another accessible city.