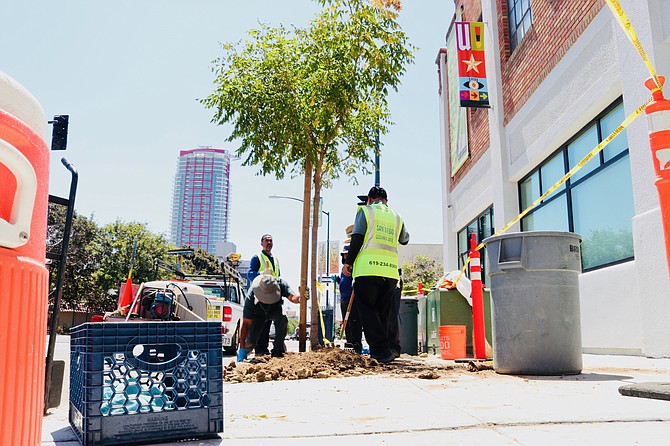 About four months ago, artist and developer Pete Garcia and his wife, Beth Callender, got this idea to start planting trees around downtown San Diego.

The couple wanted to do their bit to make downtown more appealing.

“One day, we were thinking maybe trees would be something fabulous,” said Garcia, who built the IDEA1 mixed use project in East Village with his partner, David Malmuth.

“No one doesn’t like trees. Everyone likes trees,” said Callender, a marketing executive and chair of the San Diego-Tijuana Urban Land Institute District Council.

“They can make a huge impact on the enjoyment of the street, a large impact quickly,” Callender said, “We’d love to see San Diego streets look like Chicago or other places that have tree-lined boulevards.”

Garcia decided to use the proceeds from some of the paintings he sold to pay for some trees.

Around the same time, the Clean & Safe program of the Downtown San Diego Partnership was completing a survey of downtown trees.

The survey found that there were 239 missing trees downtown, — spaces along sidewalks marked by metal grates covering bare ground where trees once stood.

The grates were meant to protect the trees, but were no match for vehicles that ran over the grates into the trees and animals and people who used the spots as outdoor toilets.

Garcia and Callender teamed up with Clean & Safe Executive Director Alonso Vivas to create what they’re calling Grow Urban — an initiative with an initial goal of replacing those missing trees.

Since it was formed, Grow Urban has raised about $7,000 and planted 10 trees.

Starting on “Giving Tuesday” Dec. 3, Grow Urban is ramping up its fundraising.

San Diego Gas & Electric has given Grow Urban a $10,000 grant to match donations from others and U.S. Bank is chipping in.

“Our U.S. Bank team in San Diego was excited to be part of a planting, clean-up and beautification in the East Village in conjunction with the San Diego Downtown Partnership,” Manuel Rodriguez, the bank’s market president in San Diego wrote in an email.

The variety of trees will vary among neighborhoods, depending on what’s already in place.

“We try to be consistent with what we see,” Vivas said.

For example, along Broadway, it will be magnolia trees and Market Street will get liquid amber trees, Vivas said.

Palm trees are out.

The trees come in large, 36-inch planters to ensure the trees are big enough to get a good start.

“Once they’re planted in the ground, they have a very good chance of surviving and they’re beautiful from the jump-start,” Vivas said. “You can’t plant a tree that comes in a small, 15 gallon bucket because it’s so fragile.”

The new trees will be planted inside the metal grates, but they’ll also have a temporary fence around them to remind people to watch out for the trees.

“We’re trying everything that we can to give these trees a fighting chance,” Vivas said. “Raising the funds, getting the trees in the ground, that’s the easy part. The hard part is you follow through.”

The follow through is to get people who live or work near the trees to adopt them and care for them. “That can mean the landlord, that can mean the property manager, that could mean the small mom-and-pop shop that’s there,” Vivas said.

Every tree that’s not planted in a spot that has an existing irrigation system will have a water-filled green bag attached to it to be filled periodically by whoever adopts the tree.

As a backup, workers with Clean & Safe will monitor the trees.

“If we happen to see a tree in distress, we will automatically send our landscaping team,” Vivas said. “It’s sometimes cheaper and a lot faster to bring that tree back to life than replace it.”

While the impetus for planting trees was beautification, Downtown Partnership CEO Betsy Brennan said they have a very practical effect.

“In Baltimore, they found when they replaced their tree canopy there was a 12 percent drop in crime just because it was great to be outdoors in the sunshine,” Brennan said.

According to the Downtown Partnership, one mature tree has the same cooling effect as 10 room-sized air conditioners and planting trees in urban landscapes increases property values by up to 20 percent.

“We’re not just planting trees for the sake of having trees,” Vivas said.

Trees make people take pride in their city and the shade they provide draws people to the area, Vivas said.

Brennan said the Grow Urban initiative is only the beginning of a drive to spruce up downtown.

“It won’t end with trees. That’s where we’re starting,” Brennan said. “We can do farm plots down here, we can do more playground equipment so we can be more attractive to families.”

For Garcia and Callendar, Grow Urban is a continuation of their efforts to improve San Diego’s urban neighborhoods.

“When you look at our public environment, San Diego compared with some other cities, it’s bordering on embarrassing. It’s not good,” Garcia said. “If you see Portland, if you see Denver, Washington, D.C., if you go to New York, Seattle — these are cities that understand and appreciate the public realm and really invest in it. You walk around and you get a sense, ‘hey, people really are here.’ We can’t just rely on the fact that we have good weather. We really need to invest more in a place that’s welcoming to the tourists and people who live here.”