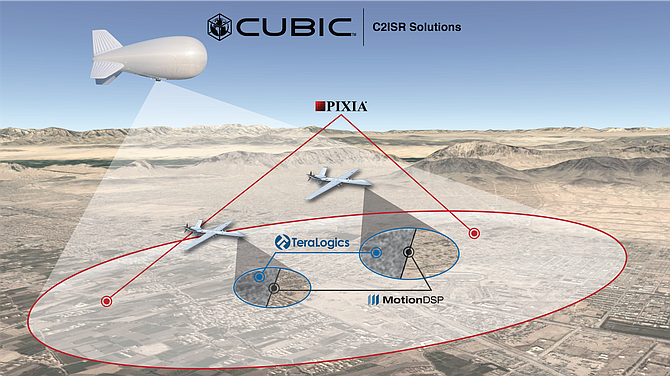 As it has in the past, Cubic is improving its technological chops by going out into the market and buying companies. This time, the San Diego defense and transportation tech specialist is adding the proficiencies of Pixia, based in the national capital region, and Delerrok, based in Vista — practically in Cubic’s own back yard.

In both cases, Cubic previously bought small stakes in the companies and took out options to buy the remaining parts at agreed-upon prices. In November, Cubic exercised its options for both Pixia and Delerrok before the options expired.

Facing the prospect that the price of both acquisitions would rise, Cubic acted, Feldmann said in an interview.

Cloud Services for Transportation and Defense

Kearny Mesa-based Cubic plans to pay a total of $250 million cash for Pixia in a deal that is expected to close in February. Pixia serves military, intelligence and industrial clients. It offers a line of specialized software that lets clients process large amounts of imagery data, including data collected from aerial platforms.

Delerrok offers a fare collection service to transit agency clients, who tap into Delerrok’s cloud-based system. Delerrok charges its clients each time a commuter pays a fare. The acquisition of Delerrok is expected to close before the year is over. Cubic will pay $36.4 million cash for the remaining stake, for a total cost of $42.9 million. The sellers will be able to earn additional funds — up to $2 million — if Delerrok achieves certain sales goals in the coming year.

Cubic will pay for both acquisitions using its revolving credit line.

The two acquisitions are expected to contribute approximately $40 million in sales, $15 million in adjusted EBITDA and add approximately 20 cents to adjusted earnings per share during Cubic’s current fiscal year, which began on Oct. 1. EBITDA stands for earnings before interest, taxes, depreciation and amortization.

Feldmann said Nov. 27 that he plans to take “a little bit of a pause” from acquisitions. He left the door open, however, to a strategic acquisition if one comes along.

Delerrok was founded in 2012 by a trio that included Robert J. Hamilton, the company’s CEO, and Gary Yamamura, its chief product officer. It is owned by a mix of private and institutional investors. Delerrok’s product, called TouchPass, lets transit agencies collect fares electronically without investing in hardware or software at the back end. In short, if offers fare collection-as-a-service.

Cubic provides fare collection services to some of the largest transit systems in the world, including London, New York and the San Francisco Bay Area.

“We see [Delerrok] as the entrée point into the middle market,” Feldmann said. Delerrok has more than 15 customers, including Omaha Metro.

The acquired company has 13 employees, including part-time contractors. Reached for comment, a company representative declined to give revenue or say if the company was profitable.

Cubic said it expects the Delerrok purchase to be dilutive to earnings in the current fiscal year and neutral in adjusted earnings per share in fiscal 2021. Cubic also told investors that the Delerrok purchase promises high margins at scale: on the order of 30% or greater. Cubic also said the business offered it cross-selling opportunities and said Delerrok may have a future in international markets.

A Needle in a Haystack

Pixia helps clients handle massive digital imagery files. It illustrates its website with satellite and surveillance views. Enlightenment Capital of Chevy Chase, Maryland, is one of its investors. Pixia developed what is known as the WAMI specification for geospatial imagery. The initials stand for Wide-Area Motion Imagery, which is now considered an industry standard.

Such imagery covers a wide swath of land, Feldmann said. Pixia’s technology lets an analyst zero in on a specific area of interest. “You can save a lot of time retrieving that information” using Pixia technology, Feldmann said, adding it provides “tremendous value” to the customer.

Cubic’s existing businesses processes full motion video, which Feldmann described as high resolution imagery covering “not as big a swath on the planet.” The combination of full-motion video and Pixia’s technology is compelling, the CEO said.

Feldmann added that Pixia will help Cubic’s U.S. military clients with the internet-connected battlefield technology (dubbed the Internet of Battlefield Things) and artificial intelligence on the battlefield.

The acquired company’s website notes that the business was founded “to address big data challenges faced by broadcast media pioneers, right at the critical moment in time when broadband connectivity opened numerous possibilities for image data transfer.” Following the terrorist attacks of Sept. 11, 2001, “we shifted our focus from commercial applications when we realized that our software could revolutionize the way massive digital imagery files were used to keep American lives safe.”

Cubic Appoints 2 to Board

Devine is the founder and CEO of FNB Holdings LLC and co-founder, chief administrative officer and chief financial officer of RTM Vital Signs LLC. She will serve on Cubic’s Audit and Compliance Committee and Technology Strategy Committee. Flowers is a partner and managing principal of InfraStrategies LLC. She will serve on the Executive Compensation Committee as well as Technology Strategy Committee.