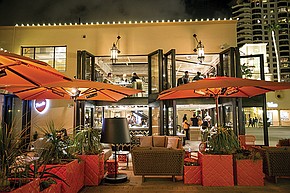 According to a press release, the $8 million project was designed by Paul Basile of Basile Studio, also based in San Diego, and the brewery, which will focus on Mexican lagers, will be led by former Gordon Biersch head brewer, Doug Hasker. Executive Creative Chef Marco Arreguin, formerly from Michelin-starred Taco Maria, will spearhead all culinary efforts.

The restaurant, the biggest Puesto location so far, seats 450 and spans more than 10,000 square feet of indoor and outdoor patio space. The beer brewed at Puesto Cerveceria will be available at Puesto’s six other California-based locations, including two in San Diego, with plans to expand distribution in the future.

Puesto was founded in 2012 by Mexican-American brothers Eric, Alan and Alex Adler, alongside cousins Isidoro and Moy Lombrozo, as well as founding chef Luisteen Gonzalez. Other Puesto locations include two in the Bay Area and two in Orange County. With the Mission Valley restaurant, Puesto will employ a total of 350 people throughout the county.