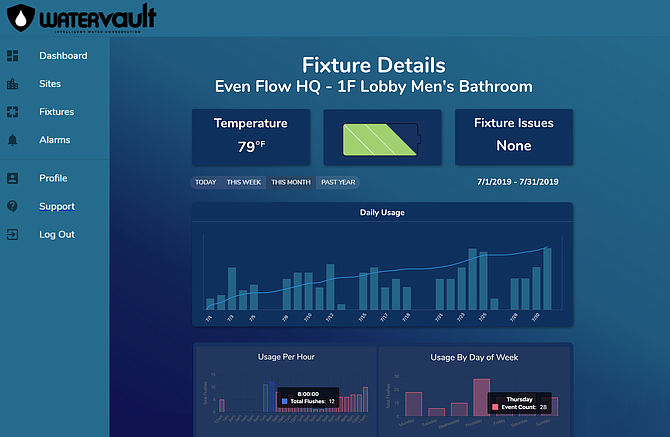 WaterVault sells its devices on a subscription service for a few dollars per month to monitor water flow. Photo courtesy of WaterVault.

An eye-popping water bill gave Hooman Borghei the idea for his newest startup, WaterVault. Borghei, who was working as a manager at Qualcomm at the time, was renting out a few properties when he received the bill totaling a couple hundred dollars. Something was off.

Borghei worked with his tenant to find the culprit — a toilet with an intermittent leak. He then built a small device that would detect leaks in the future.

“That’s how the first prototype started, as a device just for myself,” Borghei said. “I realized there’s a market for this.”

Borghei founded WaterVault last year, and has begun manufacturing the devices, which track water flow at each tap. They currently sell for about $5 per month, making them cheaper upfront than competitors Flo and Phyn. Instead of being installed on the main water supply line, they’re put in at each fixture, so users don’t have to shut off water supply to the entire building to put them in. 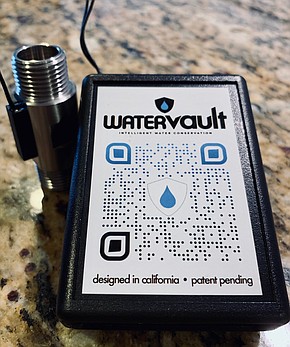 WaterVault’s devices that can be attached to a sink or toilet to detect leaks and measure water flow. They can pinpoint usage or leaks by the exact location. Photo courtesy of WaterVault.

Borghei has an extensive background in IoT devices. He was part of the team at Apple that built the first iPhone, and went on to serve as director of advanced technologies at Qualcomm, where he worked with cities and utility companies to develop IoT tools.

At first, he said, the sector started with “smart” devices that just connected smartphones to something else.

“I was a little bit jaded. The real purpose of IoT is we can build these really powerful sensors that can measure all this data,” he said. “We can put all this data through cloud analytics to process it and do something really cool with it.”

For WaterVault, Borghei sees the easiest opportunity in detecting silent leaks that might otherwise go unnoticed. Most of the time, once a leak is found, it’s a quick repair.

“Leaks are a low-hanging fruit that can cause a lot of damage and are easy to fix,” he said.

Borghei is currently focused on selling the device to commercial users, such as hotels or property management companies, that might have a harder time tracking down a leak from their water bill. Additionally, the data collected by WaterVault can be useful for maintenance decisions. For example, a company might choose to replace the toilets that are used the most, rather than all of them.

WaterVault currently has five employees at its headquarters in downtown San Diego. Next, Borghei is looking to build out its sales team. So far, he has bootstrapped the company using his own savings.

Borghei, who grew up in San Diego, also hopes his efforts will reduce water waste in the long term.

“I like going outside, to the lakes, and you just see it — the water levels are all low. I’m constantly reminded about that,” he said. “Let’s leverage the technology we have at our disposal to get better.”