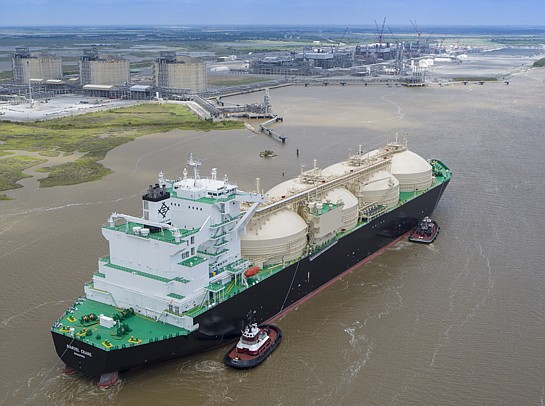 A ship carries the commissioning cargo of liquefied natural gas from Sempra’s Cameron facility in May. Photo courtesy of Sempra Energy.

Sempra Energy reported net income of $354 million, or $1.29 per share, on revenue of $2.23 billion during its second quarter. Sempra, which has grown from the parent of Southern California utilities to an international player in natural gas, reported its financial results on Aug. 2.

“We’ve set a clear mission to be North America’s premier energy infrastructure company and I am proud of the steps we’ve taken to capitalize on the once-in-a-generation opportunity created by the need to develop energy infrastructure that supports the trend toward cleaner energy and greater exports of North America’s energy,” said Jeffrey W. Martin, chairman and CEO of Sempra (NYSE: SRE), in a statement distributed by the company.

Adjusted earnings per share for the recently ended quarter came to $1.10. Analysts had expected $1.16. In a research note from Guggenheim Securities, a team led by Shahriar Pourezza called Sempra’s growth “modest” but said there are more opportunities to grow, adding that Sempra’s fourth quarter update will be the report to watch.

Sempra offered updates on several projects. It reported “good progress” on the sale of its South American utilities and summed up recent expansions in the Texas grid.

The company said it plans to wrap up construction at its Cameron liquefied natural gas (LNG) plant in Louisiana and start commercial operations by mid-August. As of Aug. 2, the Cameron plant’s first production line (called a train) had produced four commissioning cargoes. Separately, Sempra is in negotiations with Saudi Aramco for 20 years’ worth of cargoes from a proposed sister plant on the Gulf of Mexico at Port Arthur, Texas. Sempra is the parent company to San Diego Gas & Electric Co., which recently contributed $452 million to a wildfire recovery fund created by the California Legislature and Gov. Gavin Newsom. Sempra said recent legislation helps reduce SDG&E’s exposure to wildfire risk by addressing several issues related to catastrophic wildfires.