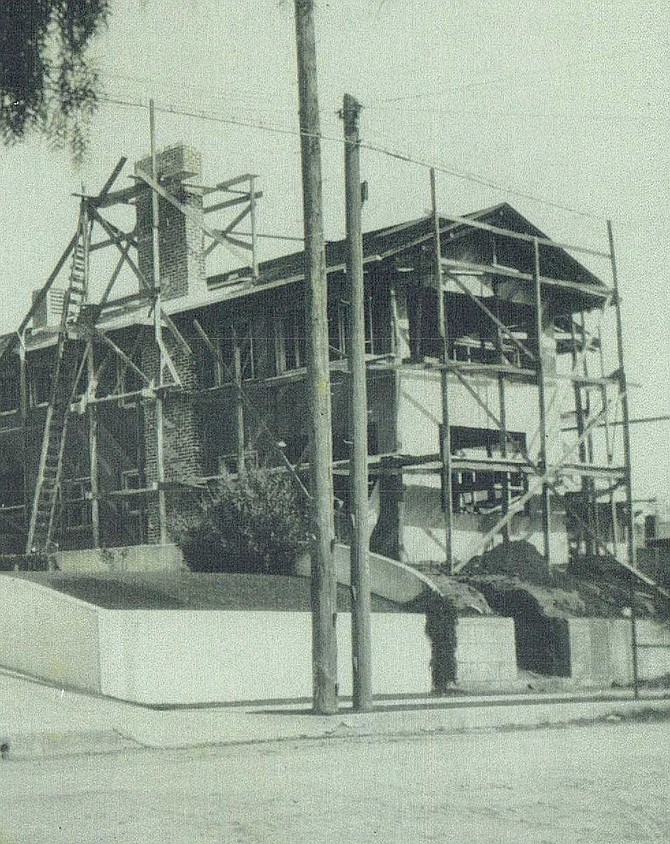 The original Harry Wegeforth home under construction in 1916. Photo courtesy of the Junior League of San Diego.

A Bankers Hill home built in 1916 for San Diego Zoo founder Harry Wegeforth is being restored and renovated by the Junior League of San Diego.

Designed by Louis Gill and Irving Gill, the home at 210 Maple St. is “one of the more complete examples” of their work, said Tim Martin, the architect on the $600,000 project.

“When you find them, you consider them a jewel and this really is such,” Martin said. “It’s remarkably like it was in the beginning.”

Working with Martin on the project is the Irwin Building Co.

Some of the woodwork inside and all the details on the building are as they were when it was built with all the original doors, Martin said.

Adding to the historical nature of the property, the grounds were originally landscaped by Kate Sessions.

The Junior League acquired the home in 1981 as its headquarters. Over time, the building has deteriorated.

“We have the crumbling stucco and the windows are all original and really need repair,” said Andrea Myers, who is heading the restoration project for the Junior League.

“We’re trying to restore the existing fabric, the original Gill design and modernize the inside so it will be more functional,” Myers said. “We have a great existing structure. We don’t want to do more to the structure than we have to.”

Aside from repairing the stucco and adding an entry that complies with the Americans with Disabilities Act, Myers said no big changes are planned for the exterior.

Parts of the interior will be renovated to provide a training kitchen and meeting space with multimedia equipment, a new lounge and a room that was originally used as a maid’s quarters will be converted into a bathroom with provisions for the disabled, Myers said.

The oak floors throughout the home will be refinished, along with a curved railing and a stairway at the entrance.

Among the interior historical features that will be retained is a cast iron stove and oven in the kitchen that Myers said measures about three feet by five feet.

“We have a lot of original fixtures as well, we have lot of the original knobs on the doors. We’re keeping those,” Myers said.

At about 4,000 square feet, “It was a very large home when it was built, particularly for the time,” Myers said.

Will Be Junior League’s HQ

In addition to serving as the Junior League’s headquarters, the restored building “will serve as a dynamic and highly functional community meeting space that will allow us to continue serving San Diego in meaningful ways, said League President Emily Green Lake.