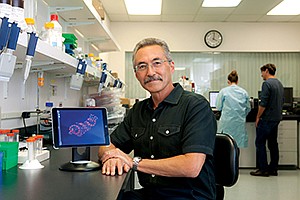 Jeffrey Stein is president and CEO of Cidara Therapeutics, one of the few companies developing drugs to fight fungal infections. File photo by Melissa Jacobs.

Cidara’s rezafungin met objectives in efficacy, safety and tolerability in the second part of phase 2 clinical trials. It also appeared rezafungin performed better than Merck’s drug cancidas, but Cidara cautioned that the trial wasn’t set up to show statistical differences.

The drug candidate is designed to prevent and treat candida infections, including candidemia. The disease — the fourth most common cause of bloodstream infections in U.S. hospitalizations — occurs when a yeast-like fungus enters the bloodstream and spreads through the body.

George Thompson, associate professor of clinical medicine at UC Davis’ School of Medicine, said in a news release that the latest data reinforces the potential of rezafungin to be a first-line treatment that’s better than current options. Cidara reported the first part of phase 2 clinical trials this spring.

“There have been no new drugs approved for the treatment of serious candida infections or the prevention of invasive fungal infections in over a decade,” said Thompson.

The study compared rezafungin — administered intravenously once a week — to Merck’s drug cancidas in 91 patients. Midway through the trial pivoted to a lower dose that will be given in phase 3 clinical trials.

“We believe this trial moves us one step closer to market,” said Jeffrey Stein, president and CEO of the San Diego biotech.

Seeing little chance of profits, drugmakers have fled antibiotics, known for being inexpensive and taken only periodically.

But Chen noted to spur antibiotic development, last month Britain’s National Health Service announced it would pilot a subscription model that will pay pharmaceutical companies up front for access to effective antibiotics, instead of reimbursement based on quantity.