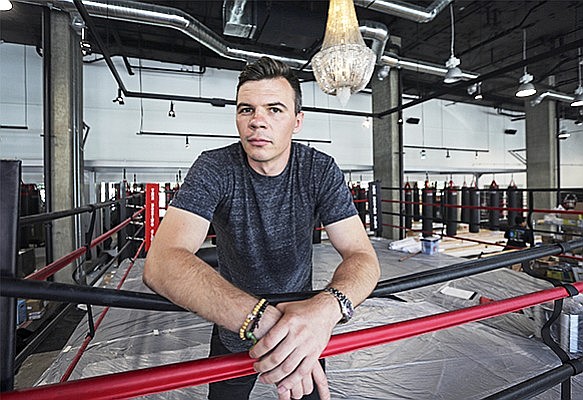 Artem Sharoshkin figured that he found the perfect location when he opened The Boxing Club in East Village on the bottom floor of the Shift apartments nearly a year ago.

“It was a great move,” Sharoshkin said.

The 21-strory red-and-black apartment tower with odd-angles at 1501 Island Ave. was designed to stand out and reflect the bohemian nature of its neighborhood.

As expected, Sharoshkin hoped, Shift has given him a pool of prospective members, and that’s paid off.

“It’s been a good synergy for Shift. Their potential tenants, they’ll show them the Shift apartment and then they’ll take them down to the Boxing Club,” Sharoshkin said. “We’ve literally became in a way, a part of that building. That’s been really cool.”

Sharoshkin set a goal of a goal of signing up 1,000 members by the Oct. 1 anniversary of his official opening, and he said he’s on target with 750 members so far.

The neighborhood itself has been a little more challenging than he expected.

All the new construction in East Village expands the pool of clients, but it also makes getting around a little difficult.

In the case of the Boxing Club, the 45-story Pinnacle Phase Two apartment tower is going up across the street.

“We’re actually looking forward to them opening. With their construction taking up the whole block, it’s definitely killed some of our business coming in,” Sharoshkin said.

On the plus side, Sharoshkin said he hopes to establish a relationship with Pinnacle tenants similar to those he has with Shift.

Before the recent development boon, East Village was a sketchy neighborhood, and it still has some issues, but Sharoshkin said the neighborhood is rapidly coming into its own.

“I would definitely recommend it,” Sharoshkin said. “What motivates us is the future of East Village.”

At the same time, Sharoshkin cautioned said anyone planning to open a business in the neighborhood has to be ready to work at it.

“We’re in a soon-to-be trendy area. That part of East Village where we are, we’re not there yet,” Sharoshkin said.

“If you have a great concept and you just hope to rely on walk-in traffic and word of mouth, it isn’t going to work,” Sharoshkin said, adding, that marketing is essential.

“You really have to create that traffic for yourself,” Sharoshkin said. “Even if you have a great product, you cannot open the doors and expect you’re going to crush it.”

The other catch is that although East Village is filling up with new residential projects like Shift and Pinnacle, the people in those projects are going elsewhere downtown for entertainment, dining and shopping.

“We’re in a heavily filled residential area but a lot of the residents don’t spend time in the East Village,” Sharoshkin.

A board member of the East Village Association, Sharoshkin said he and other business owners are working together to showcase the neighborhood residents.

“You guys live here, we want you to stay here,” Sharoshkin said.