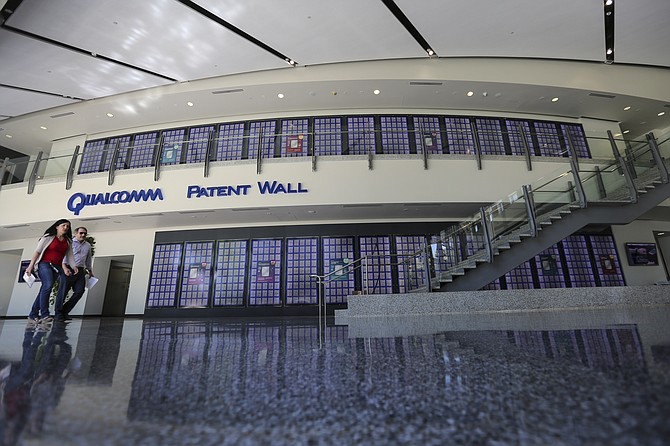 Qualcomm expects to ship 100 million fewer devices in 2019 due to trade tensions in China. Photo by Jamie Scott Lytle.

China was the star of the show going into Qualcomm Inc.’s third quarter earnings report. Trade tensions, as well as of slowing phone sales in China, had a chilling effect on the San Diego-based semiconductor company’s expectations for the end of 2019.

Qualcomm lowered its estimates for device shipments by 100 million units for the end of 2019. The company shipped 156 million mobile station modem (MSM) chips in the quarter ending June 30. For the fourth quarter, the company expects between 140 million and 160 million shipments. Qualcomm’s stock fell more than 5 percent in afterhours trading on July 31 to $69.16.

Slow-down in Phone Sales in China

Qualcomm’s Interim Chief Financial Officer David Wise said a “meaningful portion” of the expected reduction of shipments is related to China. One of the biggest factors is a reduction in Chinese customers buying new phones; Wise said device sell through rates were down 20 percent year-over-year in China. Qualcomm executives chalked this up to a pause in 4G sales ahead of 5G.

For the quarter ending on June 30, Qualcomm brought in revenues of $9.6 billion, including the $4.7 billion settlement payment from Apple Inc. It reported a net income of $2.15 billion, up 78 percent from last year. Next quarter, it expects revenues of $4.3 billion to $5.1 billion.

Qualcomm CEO Steve Mollenkopf said he expected headwinds for the next two quarters from the export ban to Huawei, as well as slowing demand for 4G phones. Leaders from Qualcomm, Intel, Broadcom, and other tech companies, went to the White House in mid-July to talk about the ban, which has restricted them from selling products to Huawei.

“As a result of the export ban, Huawei shifted their emphasis to building market share in the domestic China market, where we do not see the corresponding benefit in product or licensing revenue,” Mollenkopf said in an investor call.

In fact, Huawei gaining a larger share of the Chinese market has affected Qualcomm more than losing direct sales to Huawei as a result of the trade ban, Wise said.

In addition, Qualcomm still needs to hammer out a new licensing agreement with Huawei. The two struck an interim agreement in January, which resulted in a $150 million payment last quarter, but Qualcomm doesn’t expect any revenues from Huawei in the fourth quarter.

The solution for all of this? 5G, Qualcomm executives said.

“Our relationship with China remains very healthy and is expanding,” Qualcomm President Cristiano Amon said, referring to the company’s recent partnership with Tencent Games. “We’re optimistic about the lead we have in 5G, and hope that leads to more customers in China.”

Business in China aside, Qualcomm is also awaiting some important developments in court. The company is working to appeal its case after District Judge Lucy Koh ruled its licensing practices violated antitrust law.

The company is currently seeking a stay in the U.S. Court of Appeals for the Ninth Circuit, and was granted an expedited appeals process.

Don Rosenberg, Qualcomm’s General Counsel, cited the expedited review and briefs filed by the Department of Justice and Department of Defense as support for the company’s case.

“We’re very encouraged by this kind of support. We think there is a widespread view that our chances are very good,” he said.

Still, since Koh’s ruling, Qualcomm has reported more of its customers are, looking to renegotiate licensing terms. Alex Rogers, President of Qualcomm Technology Licensing, said the company had seen “a number of requests for renegotiations havecome in,” on top of agreements that were already in the process of negotiation.

He maintained that Qualcomm’s current agreements are still “valid and enforceable.” It also helps that the company has signed key licensing agreements with Samsung, and recently with Apple.

“We’re engaging — as we always do — very thoroughly with licensees to try to get to a process that recognizes the value of our portfolio, which we think is very good as 5G ramps,” Rogers said.