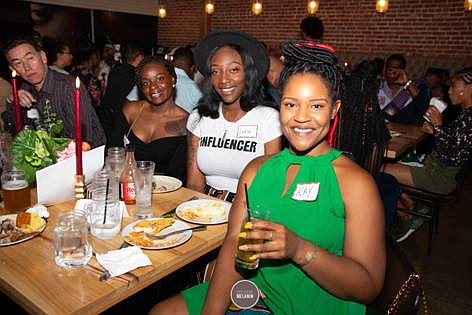 San Diego Melanin hosts one flagship event and a smaller, more intimate affair a month. The former brings out about 500 people and the latter anywhere between 70-200 attendees. Photos courtesy of San Diego Melanin.

When Loren Cobbs relocated to Tijuana from Washington, D.C., a few years ago for a job in international affairs, she hoped a quick drive up to San Diego would fulfill her yearn to see more “melanated” people like her. When she realized there were not many networking or recreational activities that catered specifically to black and brown people locally, she took matters into her own hands and started curating events herself.

In 2017, Cobbs, founder and lead curator, and a group of three others got together and officially launched San Diego Melanin, a social group that curates activations catered to minorities, but open to anyone, 29-year-old Cobbs said. Today, San Diego Melanin, which host one flagship event and a smaller, more intimate affair a month, brings out about 500 people a month for the former and anywhere between 70-200 attendees for the latter. And, according to Cobbs, San Diego Melanin generates nearly $180,000 in revenue on an annual basis and growing.

“We’ve grown substantially since we started,” said Cobbs. “On average, we’d see maybe 150 guests (per event) the first year. In the second year, we started off with 300 average event attendees. In 2019, our average event attendees (count) is around 500. Those are for our flagship monthly events. We typically have a monthly flagship event, (from) which we own almost 100% of the event curation profit.”

Cobbs said she self-funded the company. She also said the first activation, which took place April 2017, outperformed her expectations. That’s when she knew there was a clear need and value in her vision, which was to create dedicated spaces that speak directly to young, professional people of color.

Now, Cobbs said she sees other groups that cater to minorities popping up in San Diego, which she is excited about.

“My goal was to help other people see, you can and should invest in this community,” she said. “We are young professionals with purchasing power. We like to drink, we like to eat and we like to spend money on things that speak directly to us. (Now, we) see other groups pop up, (thinking), ‘maybe we too can offer experiences and

opportunity in entertainment spaces in a way I didn’t see when I first got here, or before San Diego Melanin’.”

Cobbs said San Diego Melanin has encouraged both San Diego natives and transplants to connect with people that “look like them” and what has kept the company on a positive path has been her and her team’s focus on customer service. She also said she aims to partner with other local companies that are minority and/or women-owned and, so far, has worked with the likes of Suckerfree Southern Plate & Bar, The Air Conditioned Lounge in North Park and Border X Brewing.

In the future, Cobbs said she hopes to continue to grow the San Diego Melanin brand by replicating the model in other medium-sized cities like San Diego where there are “substantial communities of professionals that look like us but aren’t being served.”