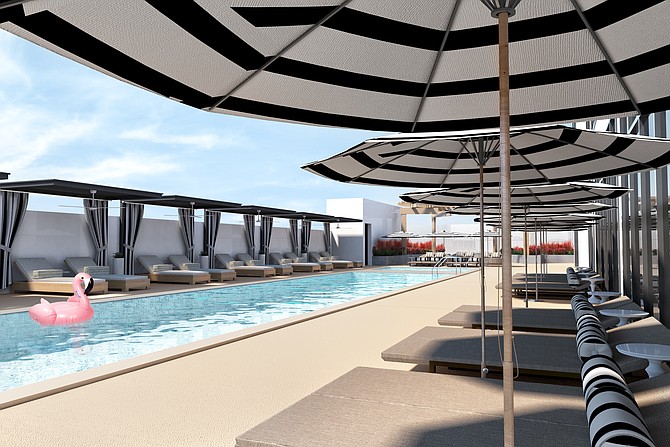 Perched at the edge of Little Italy near the foot of Ash Street, the Carte Hotel is designed as a tribute to its neighborhood, with touches inside and outside tying it to the community’s past, evoking Little Italy’s connection to fishing and San Diego Bay.

“Everything in this hotel has a touch point going back to Little Italy,” said General Manager Henri Birmele.

The exterior orange trim is meant to represent the sunset over the harbor which was the historic home to Little Italy’s fishing fleet as is the glass building facade in varying shades of blue to represent the water of the bay.

“In the morning and early afternoon, sunlight makes the blue windows stand out,” Birmele said. “When you come over the hill on Ash, this is the building you’re going to see. It gives you that kind of sheen of water. It has this really cool reflection.”

Inside, there are touches of Little Italy everywhere, from the carpeting designed to look like small stones in the sand and flowing water to light fixtures meant to evoke clouds drifting over San Diego Bay.

Wood finishes on the walls beside the hotel elevators represent the masts of the huge sailing ships that once brought people to Little Italy, Birmele said.

Costing $89 million to build, the hotel is the latest in a series of new hotels to open or planned for downtown.

In June, the 162-room The Guild Hotel opened in the remodeled Army-Navy YMCA building just a few blocks away at 500 W. Broadway.

Scheduled to open in 2020 according to the San Diego Tourism Authority is the 147-room AC Hotel at 743 Fifth Ave., the 60-room State & Grape at the northwest corner of Grape Street and State Street and the massive Manchester Pacific Gateway complex at Broadway, Pacific Coast Highway and Harbor Drive with 1,390 rooms.

Despite the flurry of construction, Carl Winston, director of the L. Robert Payne School of Hospitality and Tourism Management at San Diego State University, said the San Diego hotel market is not even close to being overbuilt.

“If you look at market occupancies, they’re very high in San Diego and I think that’s going to be true for the entire future,” Winston said. “San Diego has a lot of months and weeks where the hotels are full. Even our so-called shoulder season — September through November and March and April — those shoulders are very busy, especially the downtown market because the convention center is at capacity. There’s definitely a need. Demand is still growing for hotel rooms in San Diego.”

The general contractor for the hotel was DavisReed Construction. It was designed by Tucker Sadler Architects of San Diego with interior designs by The Manchette Studio of San Diego. Birmele said the Carte will distinguish itself from its competitors by its location and level of service.

The Carte is meant to appeal to “the high-end, sophisticated traveler who enjoys the fine things in life and enjoys San Diego as well,” Birmele said.

The location is certainly a draw for the hotel, Winston said.

“There are people who want to stay in a hotel in Little Italy. For some people, that’s going to be a lot better than the Gaslamp or Mission Valley or the waterfront,”

On balance, Winston said most people will pick a hotel based on who offers the best deal in their price range.

Among the unusual aspects of the hotel is a restaurant deliberately kept small with seating for 80 people so hotel guests are likely to leave and eat elsewhere.

“We don’t want to take away from the Little Italy restaurants. We want people to go there,” Birmele said. “We want to make it so they go to Little Italy, enjoy Little Italy.”

Conference rooms also are small, kept that way because the Carte is not meant to be a business conference hotel, Birmele said, adding, “We’re not a group hotel.”

While many of its competitors have a built-in gym, the Carte has nearly two floors set aside as a 28,000 square-foot fitness center that will be part of the Fit Athletic Club group.

The club will be free for hotel guests with memberships available to the public.

There is also an outdoor pool designed to resemble the koi pond in Balboa Park, with a planted area at one end reminiscent of the Balboa Park botanical building.

In another nod to Balboa Park, sculptor Beverly Penn is using leaves collected from the park and coated in copper to fashion a six-foot-by-six foot copper bowl that will be displayed outside the hotel along Ash Street as part of a 1,250 square-foot wine bar.

With room for 1,500 bottes, the wine bar — Fonte de Vino — will feature wine from San Diego County and Mexican vineyards.

A rooftop bar — the Above Ash Social — with views of San Diego Bay will feature live music, but it will be subdued so people living in adjacent condominiums won’t be disturbed.

“The idea is to be on the relaxed side,” Birmele said. “This is a residential area.”