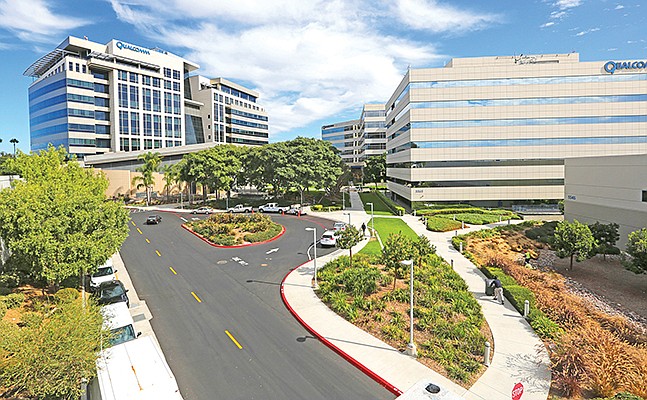 The end of a royalty dispute that bogged down Qualcomm Inc., one of San Diego’s largest employers, looks to be a win for the region.

Qualcomm, the bedrock of the local tech scene, added $26 billion to its market cap within 36 hours of settling with Apple Inc. The companies agreed to a six-year deal where Qualcomm will supply chips for Apple’s mobile devices.

The deal looks to increase the company’s headcount in San Diego, if past inflection points are any guide. Notably, last year Qualcomm shed nearly 1,400 local workers, part of a cost-cutting initiative to fend off a hostile takeover attempt from Broadcom. Now, Qualcomm appears primed to go into hiring mode locally, according to Jerry McMillin, a managing partner with Proven Recruiting.

“They started looking for those people in the last eight to 10 hours,” said McMillian. “So it’s directly correlated to the settlement.” He declined to venture a guess of how many workers Qualcomm could add.

Qualcomm spokeswoman Clare Conley declined to comment on whether Qualcomm plans to hire following the settlement. But she indicated Qualcomm’s fortunes are tied to San Diego.

“Qualcomm is obviously a big part of San Diego, and so a strong Qualcomm, is a stronger San Diego,” Conley wrote in an email.

Qualcomm’s 10,030 employees, per the regional EDC, accounted for about 12 percent of the region’s local tech talent. Spending from Qualcomm’s employees and the ecosystem around the company translated into an additional 17,850 jobs.

“For every job at Qualcomm, an additional 1.8 jobs are supported elsewhere in the San Diego economy. It truly is the job multiplier — integrating other companies and industries to provide support and collaboration that leads to industry-leading technology,” the study said.

The $4 billion economic impact fell 18 percent compared with the EDC’s study of the prior year, before the layoffs.

Even when Qualcomm sheds workers, that’s not always a bad thing for the region.

Peter Callstrom, CEO of the San Diego Workforce Partnership, said former Qualcomm employees have propelled startups and midsized companies hungry for tech talent. The workforce partnership has helped place some of these employees.

Beyond jobs, the company’s philanthropic efforts include its Thinkabit Lab, which helps prepare San Diego middle schoolers for careers in tech. And Qualcomm is so enmeshed in San Diego that many of the region’s institutions bear the company’s name, or that of company titans.

If Qualcomm does indeed go on a hiring spree, McMillin said, the company, like others, faces a scramble for tech employees.

“Their searches would be competitive. This is a candidate-driven market, especially for tech talent,” McMillin said.

Kanani Breckenridge, CEO of recruiting firm Kismet Search, added her voice to the chorus of those who expect the settlement to boost San Diego.

“Having this settled is going to be a big boon for Qualcomm and San Diego,” she said.