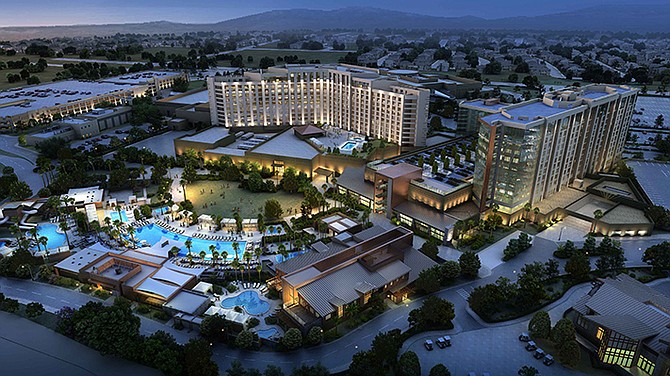 Delawie first worked with the Pechanga Resort and Casino in 2002 and, most recently, on its $300 million expansion and revamp that wrapped up in 2018. Photo courtesy of Delawie

For over 20 years, Delawie, a San Diego-based architectural firm, had its hands full as the sole architect for Qualcomm Inc. But, following a lawsuit that kept publicly-traded companies from sole-sourcing and instead required them to select via a bidding process in the mid-1990s, Delawie had some time on its hands.

Around the same period, the tribal gaming industry began to grow significantly. Through a chance meeting, a principal over at Delawie met the Pechanga Band of Luiseño Indians, behind the Pechanga Resort and Casino in Temecula, who wanted to convert its trailer-based casino to an official hard-wall property. That was the first tribal contract Delawie landed back in 1994 and what started its relationship with the Native American tribes nationwide.

Since then, Delawie has worked with almost 10 tribes on projects around the country, including the recent $300 million expansion at Pechanga that was unveiled in March 2018. Currently, Delawie is working with Swinerton, a San Francisco-based commercial construction company, on a $50 million revamp of the San Pasqual Band of Mission Indians’ Valley View Casino and Hotel, Delawie’s first casino project within San Diego County. Started in 2018, the expansion will add 43,000 square feet of casino space and renovate the existing casino, hotel and restaurants, and is scheduled to wrap up July 2019.

Some of the other projects Delawie has worked on recently includes the Moxy by Marriott hotel in downtown San Diego; a master planning service, a 2,000 seat multiple venue headliner theater and cabaret bar for the Agua Caliente Casino in Palm Springs; the designs for shark and penguin exhibits at SeaWorld parks nationwide; the expansion of the Reuben H. Fleet Science Center, including the current IMAX renovation, in Balboa Park; and the $84 million Southwest Fisheries Science Center for the National Oceanic and Atmospheric Administration in Maryland.

Delawie was founded in 1961 and has nearly 60 employees locally. Frank Ternasky, principal and president of the company, said Delawie’s longstanding relationship with the tribes is because of its openness and integrity as a business.

“The proof is in what you do,” said Ternasky, who has been with the company over 20 years. “Every time we work with [the tribes], we are honest with them and advocate for their well-being with contractors and municipalities. We go to them and ask what they want and we use our skills to give them what they want. We will modify if we need to take their vision to great levels. We do mostly repeat business because we do good work and they keep asking us to come back.”

Ternasky said once he gained the trust of one tribe, he was able to work with others, mostly because they all talk to each other regularly and share information. He said, to work with the tribes, one has to understand and respect their systems, including having to sign agreement waivers of sovereign communities. This means you cannot sue the casinos and the tribes outside of their courts, which are adjudicated by a tribal council.

However, it is possible to appeal a tribal court decision in federal court.

“You sign away a lot of the rights you take for granted,” he said, “so, there is a lot of trust there.”