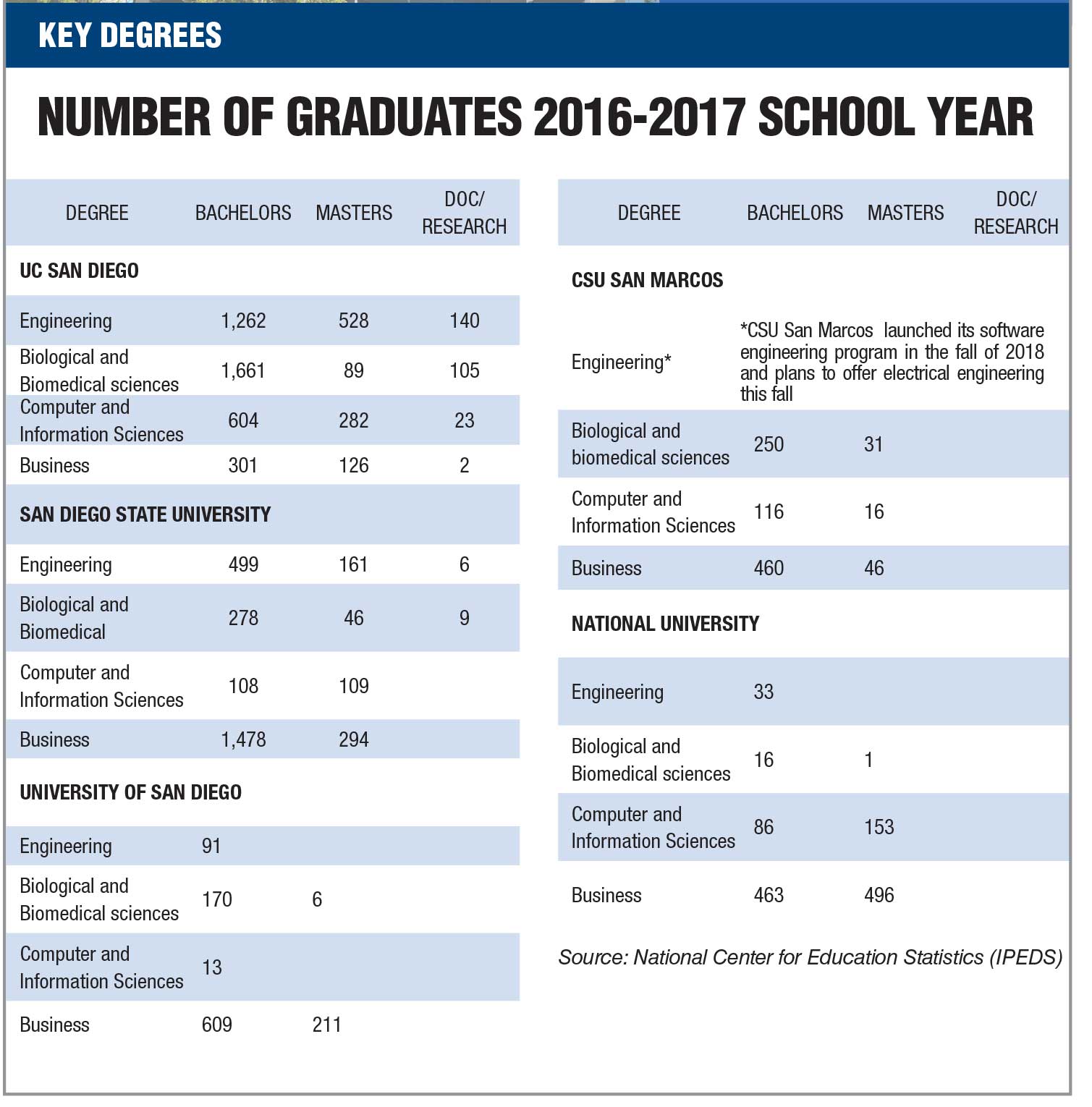 San Diego’s got talent. Large tech firms Apple Inc. and Teradata Corp. cited it as the main draw when they announced plans to open new offices in the area, and a host of startups have also relocated down the coast, in hopes of being able to attract more workers.

With UC San Diego, San Diego State University, and other major institutions in town, San Diego has roughly 10,000 graduates in the tech and biotech sectors, according to the San Diego Regional Economic Development Corp. But it’s still not enough.

Area universities and companies are stepping up their efforts to help meet the growing demand for tech workers. The number of tech openings in the region is expected to grow to 20,000 per year by 2028. And even with thousands of engineering graduates per year, tech-heavy companies are still working with shortages for skills that are in high demand.

“The one key area that the whole high-tech industry struggles with getting is software development with specialties around cloud computing, cybersecurity and data analytics,” said Brad Cook, global vice president for talent acquisition at Teradata. “Companies want to move everything to a cloud environment. There are literally more jobs than there are people.”

Though recruiting for competitive skills is difficult, especially when it comes to newer technologies, Cook said it has improved as more companies call San Diego home.

“It’s getting easier than it was a year or so ago,” he said. “A while ago, there weren’t that many tech firms in San Diego. If someone wants to move, they want to make sure they have multiple opportunities.”

Cook said Teradata works heavily with local universities and internship programs to develop future talent. It also has been partnering with groups like the San Diego Regional EDC to help recruit for its more immediate openings, which run the gamut from finance to marketing to engineering.

“Trying to move someone from Boston right now is probably a little bit easier for us than it was a little while ago,” he said. “It is still challenging to bring people from the Bay Area.”

Getting San Diego on the Map

That was the crux of the EDC’s “San Diego: Life. Changing.” campaign, which launched two years ago to help draw experienced tech and life sciences talent to the area. Before starting the campaign, San Diego Regional EDC Marketing Manager Bernadine Locsin said they had identified mid-level management for tech and life sciences companies as the biggest gap in the workforce.

Companies can recruit aggressively by highlighting the growing cluster of interesting tech companies in San Diego, the opportunity to do meaningful work, and of course, the beach. But it still won’t be enough to fill all of their needs.

“We can’t just attract all of the talent that we need. We have so many STEM occupations that are currently unfilled,” said Eduardo Velasquez, research manager for the San Diego Regional EDC. “We have to look inward and see how we can develop our own talent right in our backyard.”

UC San Diego’s Jacobs School of Engineering is a reflection of local companies’ hunger for talent. Annually, the Jacobs School graduates between 2,700 and 2,900 engineers into the tech industry.

Since he was recruited from UC Berkeley to lead the school six years ago, Dean Albert Pisano has hired 92 engineering faculty. The Jacobs School’s graduate program has also doubled during that time.

“I feel I was offered a position here because everyone wanted to see the school accelerate and achieve all we can achieve,” Pisano said. “Industries love having a large, relevant, progressive school in their backyard. That’s the kind of place that can generate the talent flow that they’re hungry for.”

Building a Curriculum Around Need

Three times per month, Pisano meets with a corporate affiliates board consisting of more than 70 local companies to hear what skills and experience they need the most. He has used that feedback to build a curriculum for systems engineering and experiential engineering, to help fill skills that many tech firms seek.

In addition to technical knowledge and hands-on experience, Pisano said many companies are looking for soft skills, such as students that have experience in leadership, have an entrepreneurial bent, or are good at thinking out of the box.

“At the very highest level, this huge group of companies is looking to the engineering school to hire a diverse group of talented individuals who can disrupt and innovate from within their own companies,” he said. “That is a tough bill to fill.”

“It was the companies coming to us and saying, ‘we just can’t get enough. We want talent who’s here, people who are committed to the region and based in the region,’” said Patricia Prado-Olmos, vice president of community engagement for CSU San Marcos.

After a five-year feasibility study, the university received a $6 million federal grant to jump-start the program. It received additional support from Viasat Inc. and Hunter Industries to help build out the lab space and other facilities it would need for the program.

More than 80 percent of CSU San Marcos’ students remain in the San Diego region, and roughly half of its graduates are first-generation college students.

“It’s going to be our graduates that are developing the next innovation economies and stepping into the biotech industry,” she said. “That’s another reason we want to partner and be good stewards with industry sectors in the region.”

San Diego has a higher concentration of degreed workers compared with the national average; roughly one in three job holders in the area have a bachelor’s degree or higher. But the region still has several untapped sources of talent, with the proportion of degree-holders not reflecting the region’s future workforce.

In 2017, California State University system received 32,000 more qualified applicants than it had enough staff and space for, with San Diego being one of the oversubscribed campuses. Rising tuition rates also serve as a barrier to prospective students. For the University of California system, in-state tuition was $11,442 for the 2018-2019 school year, compared with $7,126 in the 2008-2009 school year, at the beginning of the financial crisis.

Another dilemma: Many of San Diego’s innovative companies with high-paying jobs still require a bachelor’s degree, at minimum.

“Cost is a factor. Just physical proximity can be a barrier for a lot of people who are first-generation American citizens,” said Velasquez of the EDC. “Navigating that process (of higher education) is one that requires guidance. These companies are trying to find ways to engage populations that historically they haven’t.”

For some companies, that can mean building future talent through internship programs, and making sure young students are connected with the opportunities in the San Diego area.

A growing number of community colleges are also stepping up to provide students with degrees that can lead to high-paying jobs. For example, MiraCosta Community College offers a bachelor’s degree in biomanufacturing, which ranges from the development of cell cultures to quality control for medicines.

San Diego Mesa College also offers a four-year degree in Health Information Management, which allows students to manage teams working with electronic health record systems and government health agencies. The degree was first introduced as a pilot program, thanks to legislation signed the prior year. So far, it has seen 15 graduates last year, and 16 students are expected to graduate this May.

Program Director Connie Renda said when they did research before proposing the program, they found 20 percent job growth in health information technology.

“Employers were saying they were hiring from out of state because they needed credentialed employees,” she said. “The cool thing about our industry is that we are kind of everywhere.”

Everything from big health care systems such as Sharp HealthCare and Scripps Health, to small practices, research institutions, and even state prisons need the ability to find solutions based on health care data.

Renda said many of the graduates have seen the program pay off with substantial pay increases or promotions. The program reports an 85 percent to 90 percent success rate.

“We want to make sure there’s a flow of young talent coming out of universities,” Velasquez said. “The depth of the talent pool that we have in San Diego is really what attracts companies to grow and stay here in the region. That diversity of talent and breadth of talent is our strongest asset.”