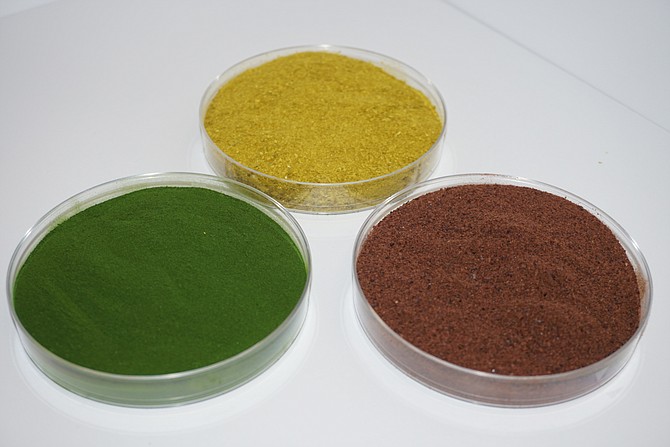 With the rise of the Impossible Burger and Beyond Meat tacos, and other plant-based products, one San Diego startup is looking to take a bite of a growing market.

Triton Algae Innovations, a spinout from UC San Diego research, recently secured approval to begin selling its algae-based protein product. An independent source designated its product as Generally Recognized as Safe (GRAS), enough proof for Triton to begin selling, but in March, the company also secured a letter that the FDA had “no questions” about its GRAS designation, an important stamp of approval as it seeks partners for its algae-based protein.

“That was a really nice milestone for us to reach,” said David Schroeder, director of corporate and regulatory affairs for Triton. “We feel good about where things are and where we might be able to fit into this rapidly evolving food space.”

While other algae-based proteins exist, Triton’s product is based on a species of algae that hadn’t previously been commercialized, Chlamydomonas reinhardtii.

Though it had been studied extensively in labs, C. Reinhardtii wasn’t used in food products in the past because it was dominated by other algaes in the wild. But Triton found a way to use a closed fermentation process, similar to the stainless steel tanks of a brewery, to grow the algae. It is then dried and ground into a powder form.

“People compare it to a wheatgrass or dried parsley flavor,” Schroeder said.

The company was spun out of research conducted by co-founder Steve Mayfield at UCSD. It brought on industry expert Xun Wang as its president and CEO, who previously held executive posts at Sapphire Energy and Syngenta Biotech.

Triton currently produces a green, yellow and red phenotype of algae. Heme, a type of iron in red algae, is the component in plant-based meats that makes them sizzle and taste like, well, meat.

“We’re in discussions with three or four companies right now that are very interested in that potential use,” Schroeder said. 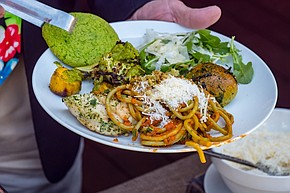 A buffet lunch prepared using Triton Algae Innovations' product is served at the Farmer and the Seahorse.

Local chefs have also dished up Triton’s algae in pilot tests. The Farmer and The Seahorse’s Brian Malarkey made rolls out of it for an algae-themed meal, and InterContinental hotel chef Paul McCabe served an algae buffet lunch for BlueTech Week, a conference for ocean industry.

“We’ve fiddled around with different formulations of our own: pastas, protein bars…” Schroeder said. “We’re excited to see different end uses being devised.”

Currently, Triton has nine employees, and is using contract manufacturing organizations for commercial-scale production. It hopes to scale up its manufacturing as it brings on more commercial partners.

As algae-based products appear in everything from the health section of supermarkets to fast-food restaurants, Schroder said the industry looks poised for growth.

“The more we see it consumed, you see this little light flashing on over (consumers’) heads. They say, ‘OK, I get this,’” Schroeder said. “We’re excited about not just bringing a cool new product in the food space, but hoping in the long haul it can play a meaningful role in the bigger challenges we’re seeing on a global scale in food, health and nutrition.’”