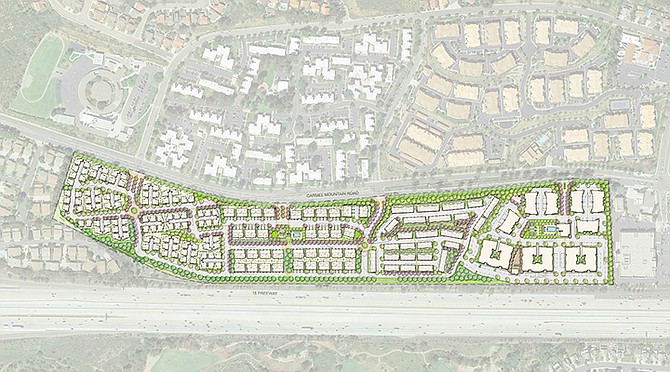 Shown is the Pacific Village Site Plan. Scheduled for completion in 2020, the new Pacific Village is targeted at entry level buyers, although, Kevin Nolen, a director in Cushman & Wakefield’s San Diego offices, said Lennar Corp. has yet to set prices for the new homes. Photo courtesy of Atlantic Pacific

Plans for development of a new residential community in Rancho Penasquitos edged closer to reality when Lennar Corp. acquired the 41.5 acre site from Atlantic Pacific Cos.

The Pacific Village project is a joint venture between Lennar and Atlantic Pacific for $52.1 million.

As part of the deal, Atlantic Pacific will develop an apartment complex on 11 acres of the site, said Kevin Nolen, a director in Cushman & Wakefield’s San Diego offices. 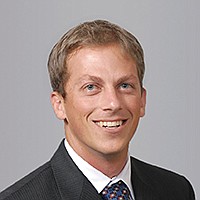 Located off of Carmel Mountain Road at the northwest corner of state Route 56 and Interstate 15, the bulk of the site will be used by Lennar for development of a residential neighborhood that will include 99 single-family homes, 105 triplexes and 120 townhomes.

The project had drawn some controversy.

To make way for it, the 332-unit Penasquitos Village that was built in 1978 had to be torn down.

Penasquitos Village had been home primarily to low income renters who got federal housing assistance.

Nolen said developers of the new project worked with the San Diego Housing Commission to find homes for the displaced renters. The new project also will include some affordable apartments.

“They were all taken care of,” Nolen said.

Scheduled for completion in 2020, the new Pacific Village is targeted at entry level buyers, although, Nolen said Lennar has yet to set prices for the new homes.

“Pacific Village will create home ownership opportunities for everyday San Diegans, while delivering a number of benefits to the community,” Nolen said.

They include “nearly doubling” the number of housing units on the site, he said.

The community will have a number of energy-saving elements, including solar power for the homes, electric vehicle charging stations and a design aimed to conserve water.

In a prepared statement, Bill Ostrem, San Diego Division president of Lennar, said “Pacific Village is focused on smart-growth oriented housing that is close to jobs and transit and connectivity that promotes walking and biking to nearby amenities and activity centers.”

Nolen said the project is a bit of a rarity because of the size of the site.