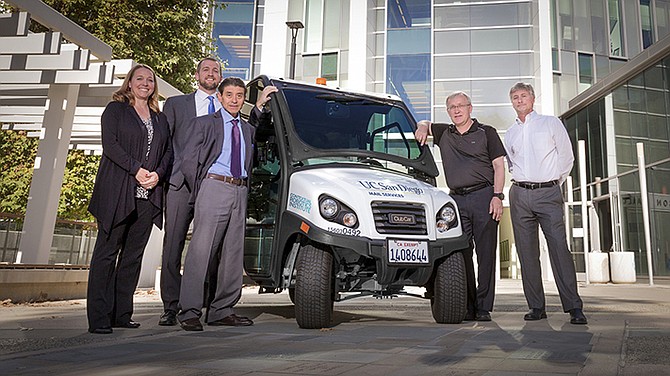 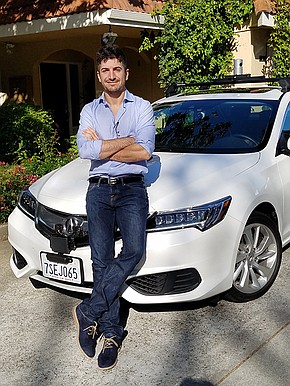 At its offices tucked away in a San Francisco home, Comma.ai was running short on space. CEO Riccardo Biasini knew it was time for a change, and wanted to consider all of the company’s options.

The startup, which builds advanced driver assistance systems that can be retrofitted to several popular car brands, announced in March that it had moved its headquarters to San Diego’s Little Italy neighborhood.

“For the stage we are at, it made sense to consider, maybe Silicon Valley is not the best place to keep going,” Biasini said.

He only had one concern — moving might have been the best decision for the company, but would all 12 of its employees be on board?

“It turns out that everybody was very happy to move,” Biasini said.

Comma.ai is one of a growing number of companies in San Diego working to piece together the puzzle of autonomous driving. 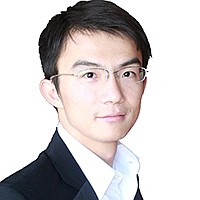 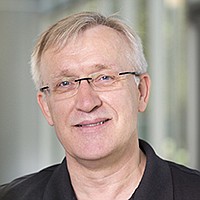 TuSimple, a startup in UTC working to develop software for autonomous trucks, recently closed a $95 million round led by Chinese media company Sina. Co-founder and Chief Technology Officer Xiaodi Hou decided to launch the company in San Diego, where it currently has 140 employees, after graduating from the California Institute of Technology.

“We chose San Diego for several reasons. Top on the list is that being outside of Silicon Valley enables the head-down approach needed to develop the technology required for autonomous trucks,” Hou wrote in an email. “San Diego’s great natural environment helps us to attract talent.”

Henrik Christensen, director of the Contextual Robotics Institute at UC San Diego’s Jacobs School of Engineering, said the area has a few key ingredients for success: a lower cost of living, regulatory support and lots of engineering talent.

“We have the human capital, but we need to have enough industry here that we don’t put them on the first flight to Silicon Valley,” Christensen said. “I would like to build a robot valley. How can we in San Diego build an ecosystem that is the parallel to Silicon Valley in San Francisco, but more focused on embedded systems, robotics, and autonomous vehicles?”

For Biasini, the lower cost of living was the main reason that he, and the rest of his team, were willing to move down the coast. He expected the move would at least halve their expenses, giving them an office with room to grow for two years.

He also said it made recruiting a bit easier. The company is currently hiring for seven engineering positions.

“The tech scene (in San Diego) is definitely rising. If you work in a startup in San Francisco, your salary isn’t the same salary that you make at big tech companies, Google and Facebook,” he said. 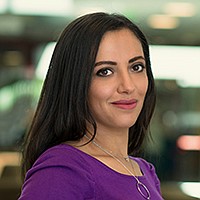 ‘Opportunities to Be Creative’

Driving down Interstate 15, you might be able to spot one of Qualcomm’s self-driving cars. Fadoua Chafik, a senior staff engineer at Qualcomm, is part of a growing team at the company building out technologies that make vehicles smarter.

Since Chafik joined the company, she worked on Qualcomm’s first product in infotainment, which supports the systems in cars’ dashboards used for navigation, music and other tools. Now, she helps define which silicon technologies Qualcomm will use for its future automotive products.

In the last three years, Chafik said, the segment has grown. Though infotainment is still a big part of Qualcomm’s work, the company is also dedicating more resources to its C-V2X (connected vehicle-to-everything) technology. The company hopes C-V2X will reduce accidents in the short-term, and support autonomous driving in the long-term by allowing cars to communicate directly using cellular technology, as well as gather information from smart infrastructure, such as connected traffic lights.

“It’s really changing,” Chafik said. “It’s exciting because it’s also a business for Qualcomm that is growing, so we have a lot of opportunities to be creative.”

At the other end of the equation, across San Diego County, cities are starting to build out infrastructure that can support self-driving cars. In Chula Vista, for example, the city has deployed 29 intelligent traffic signals along main thoroughfares Telegraph Canyon Road and H Street as part of a strategic action plan the city adopted in 2017. The lights can adjust their duration based on traffic patterns, and will be able to “talk” to vehicles equipped with new technologies to warn them of an approaching red light.

“When you talk about smart cities, it can’t happen in a vacuum,” said Dennis Gakunga, chief sustainability officer for the city of Chula Vista. “This technology is a prerequisite to the vehicle-to-infrastructure technology of the future.”

But the technology isn’t limited to the roads. At UC San Diego, a team of 15 students is also programming two mail delivery carts. Some of them are working on intersection logic, while another group is training the system to recognize and avoid pedestrians on UCSD’s busy campus.

The “smart carts” are tested almost every day, with a human driver at the ready, of course.

“It’s not very reliable, but we’re getting there,” Christensen said. “We’re testing (this tech) at UCSD because UCSD in many cases is the size of a small city. We have 65,000 people coming in every day.”

Later on, Christensen hopes the carts won’t just be delivering mail. After the San Diego Trolley is extended to UCSD’s campus, he hopes they can serve passengers by transporting them to the hospital, or across campus to class. 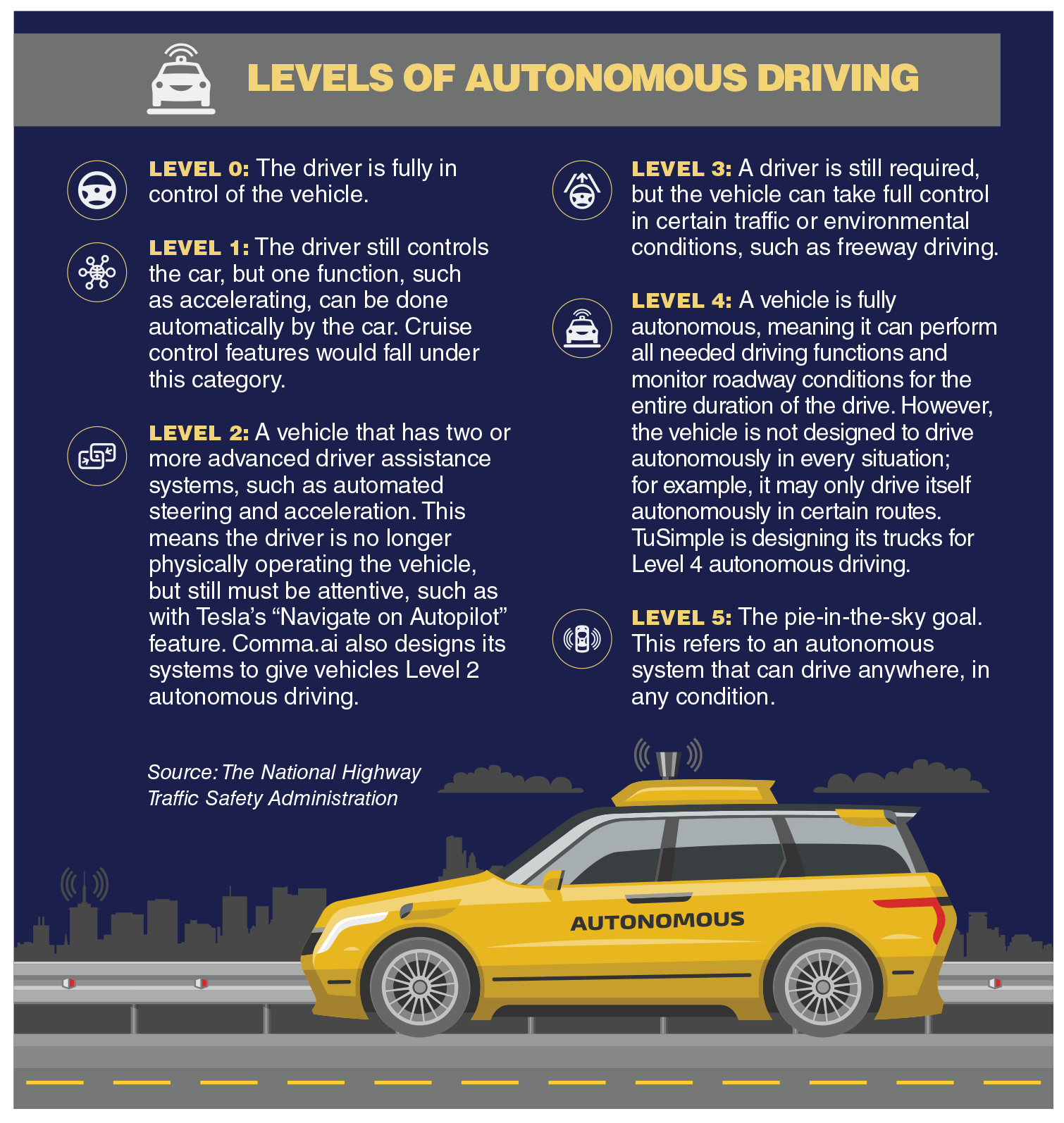 “We’re initially doing it at a low speed, which makes it much more accessible than trying to detect people when you’re moving at 50 mph,” he said. “Rather than thinking how many autonomous cars we can get on the highway, I’d rather think how can we build these communities in such a way that they can leverage these smart transportation systems.”

While most autonomous vehicle companies will say their technology is 90 percent of the way there, the final leg of the journey will be the most difficult. While self-driving cars perform well in optimal conditions, snowstorms, flash floods and erratic human drivers still pose a challenge.

TuSimple has been working on this by running its own fleet of trucks hauling cargo across Arizona, New Mexico and Texas to collect as much data as possible on how they perform. The company has taught its trucks to drive through rain and high winds, and it recently added low-light driving to its repertoire. The vehicles still aren’t prepared for snow, though they got their first taste of it when Tucson got a dusting this winter.

“We were sitting with a company the other week … I said ‘OK, what are you guys planning to do about tumbleweeds?’ They said, ‘what do you mean about tumbleweeds?’” Palmer said. “To a computer vision system, it looks like a big boulder rolling across the road and it makes the systems freak out. It starts making a bunch of calculations that are going to be inevitably wrong.”

Smart Drive also uses its data to help self-driving car companies navigate other unexpected problems, such as the driver in front of them making a sudden U-turn. Companies will take that simulation and run 10,000 iterations of it.

“We see so many edge cases, it allows us to really fine tune the things that can happen and where you should prioritize your development,” Palmer said. “In the market there’s a lot of forward positioning. As (companies) are starting to move down the development cycle, they’re realizing how complex the problem is.”

For Comm.ai’s Biasini, the answer is to keep humans in the equation — and make them better drivers. The company is developing software that can assist cars with maintaining their lane and keeping a safe distance from other vehicles, but its hardware product also includes a driver-facing camera, to ensure the operator’s attention is to the road.

“Smarter cars that are safer and more comfortable… I think that’s going to be the future for the next 10, 20 years,” Biasini said.