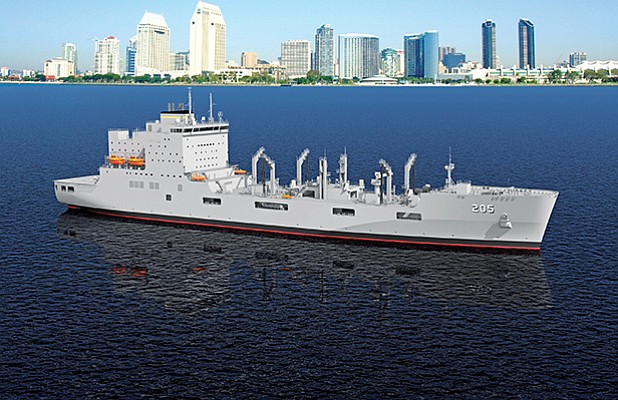 The future USNS John Lewis will be the first of six oilers built to replenish Navy ships in the western Pacific and Indian oceans. NASSCO received an order from the Navy in July 2016. The deal for the initial ship is $640.2 million and the six-ship order had a $3.16 billion contract ceiling. The Navy could eventually buy 20 such ships.

Like many things in shipbuilding (and the Navy), the start of construction calls for a ceremony: an honoree presses a button to cut the first piece of steel. Melinda Odermatt, a supply chain professional with General Dynamics NASSCO, was chosen for the job.

The 742-foot ships in the John Lewis class will have double hulls and a full-load displacement of 49,850 tons.

Shares of General Dynamics trade on the New York Stock Exchange under the symbol GD.

The San Diego chapter of the National Defense Industrial Association will present its fall defense and industry forum Oct. 23 and 24 at the Town and Country San Diego, 500 N. Hotel Circle in San Diego. The meeting is a chance for established U.S. Navy contractors — and potential suppliers — to hear from one of San Diego’s biggest military buyers, the Space and Naval Warfare Systems Command (abbreviated SPAWAR), which will offer its forecast for the next fiscal year. Details on the forum are available at www.ndia-sd.org.

RQ Will Bring Attention to Detail To SEAL Campus Work

The Navy awarded RQ Construction LLC of Carlsbad a $63.6 million firm fixed-price contract to design and build facilities at the Naval Special Warfare Coastal Campus at Coronado. Under the deal, RQ will be responsible for two separate military construction projects: facilities for SEAL Teams 1 and 3.

Nine businesses bid on the contract. The Pentagon announced the award Sept. 13.

The contract contains 11 unexercised options and six modifications which, if exercised, would increase the contract’s value to $73.2 million.

Work is expected to be complete by March 2021.

The facilities will support a variety of functions including operational gear storage, applied instruction, and administrative, as well as interior and exterior operational load out areas. The projects include site improvements and site preparations, mechanical and electrical utilities, telecommunications, emergency generator, landscaping, irrigation, drainage, parking and exterior lighting.