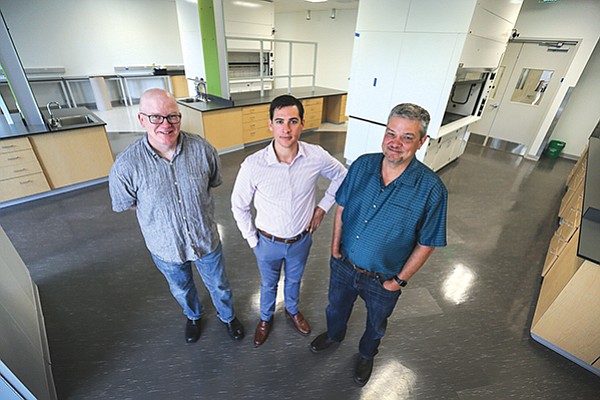 Company Description: Crinetics is working on drugs for endocrine-related cancers and endocrine disorders

Crinetics Pharmaceuticals in April expanded into this building at 10222 Barnes Canyon Road.

Crinetics in July raised $102 million through an initial public offering, 27.5 percent more than expected. Just four months earlier Crinetics took in $63.5 million in a Series B financing round.

“It gives us a very strong balance sheet and the ability to take a few risks,” said CEO Scott Struthers.

Funds are going to drugs for endocrine-related cancers and endocrine disorders, areas in which management points to its track record.

Crinetics’ lead drug is targeting acromegaly, a hormonal disorder caused by a benign tumor of the pituitary gland, and can lead to complications like hypertension, diabetes and heart failure.

Removal of the tumor is the first treatment option, yet many have no choice but painful monthly injections that sometimes don’t work. Crinetics’ drug, CRN00808, is a pill taken once a day.

“If all we do is make a once daily oral replacement we think that’s a big help for patients. But we’re also trying to improve the efficacy,” said Struthers.

CRN00808 is gearing up for a mid-stage clinical trial, or Phase 2 to be specific. But competition is afoot. Massachusetts-based Chiasma’s pill for acromegaly was rejected by the U.S. Food and Drug Administration in 2016 but is in a new Phase 3 trial.

The share could be even greater given the drug’s safety profile and competitor hurdles, she said in an Aug. 13 research note.

While seeing long-term upside, Fye issued a neutral stock rating since the company won’t report out significant news for a while.

“We are especially encouraged by the experienced mgmt. team leading the programs that leverage their chemistry and biology expertise in three indications,” Schwartz wrote.

Struthers from 1998 to 2008 was the head of endocrinology and metabolism at San Diego’s Neurocrine Biosciences, playing a major part in the recently approved drug Elagolix, which treats pain stemming from the gynecological disorder endometriosis.

But Struthers envisioned a new company built on expertise in drugs targeting what are called peptide hormone receptors. It’s an area Struthers gained familiarity with while earning his undergraduate at UC San Diego and Ph.D. at the Salk Institute for Biological Studies.

“Now we’re actually getting paid for what we like doing,” Struthers said.

The company’s first lab equipment, supplies and chemicals were borrowed or came from friends’ companies shutting down. This philosophy of sharing produced the San Diego Entrepreneurs Exchange, co-founded by Struthers.

Grants funded the first six years of the company, and in 2015 Crinetics received a $40 million Series A round.

In addition to CRN00808, Crinetics is planning Phase 1 trials for CRN02481, aimed at congenital hyperinsulinism, which can cause seizures, developmental disorders, learning disabilities, coma and even death.

Phase 1 trials are also planned for CRN01941 for neuroendocrine tumors, and there’s a preclinical program for Cushing’s disease.

Crinetics started 2018 with 20 employees, now has 38 workers, and looking to add an additional 10 employees or so by year’s end. To accommodate the growth, the company in April signed a 30,000-square-foot lease at 10222 Barnes Canyon Road.

The IPO, along with existing cash, will provide at least a two-year runway, according to documents the company recently filed.