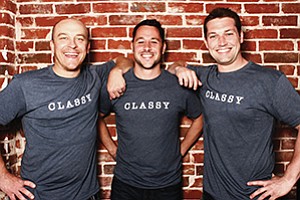 Classy, a San Diego startup that helps nonprofits fundraise, reached its 30-year-goal in seven years’ time. The company reached $1 billion in donations made through its platform on Oct. 30.

CEO and co-founder Scot Chisholm said it took the company six years to raise the first $500 million. It drummed up the remaining half in the last 14 months.

“We’re growing by leaps and bounds still,” Chisholm said. “We thought it would take longer. …I’m so happy that it’s happened much sooner than we anticipated, and most of it happened in the last year.”

Chisholm sees online fundraising, including local peer GoFundMe, as an emerging market. He said it continues to grow by double digits every year.

Classy’s growth was also fueled by the recent addition of a marquee client. The Salvation Army began using its platform about six months ago, adding its 8,000 locations to Classy’s user base.

Lt. Col. Ward Matthews, national spokesperson for the Salvation Army, said the company first heard about Classy through a referral from Apple Inc.

“We really moved to Classy seeking a better donor experience,” he said.

With large charities, such as the Salvation Army, about five percent of donations are made online. Many users still prefer to mail a check at the end of the year. But that’s changing, as more users turn online, or to mobile devices, to give.

Classy’s next goal is to double the number of recurring donors on its platform, who return to nonprofits to give over and over again.

“The donor who believes in your mission and returns over and over again to give is the holy grail in helping people,” Matthews said. “If we don’t have to continually replace lost donors, then the year goes better for those in need, because we have funds to help them.”

Like a subscription, Chisholm said repeat donors are also looking to receive more frequent updates on their gift in exchange.

Classy’s second goal is to double the number of donations made again. Chisholm wants to see Classy reach $2 billion within two years.

“If we can drive more recurring givers, that milestone will come quickly,” he said.