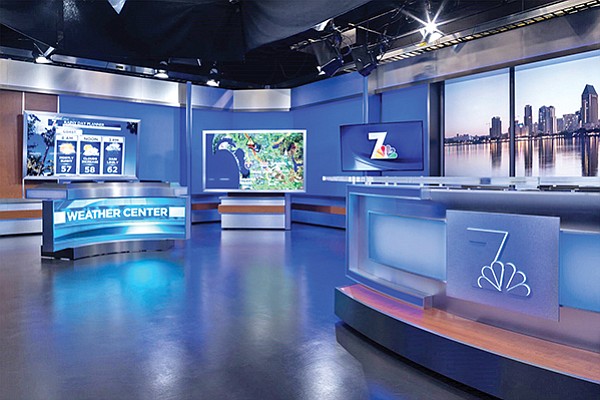 It might not sound all that appealing, but for an electrical contractor, a wastewater treatment plant is a thing of beauty.

Such a project “can really carry you for a while with revenue,” said Brian Jordan.

Jordan is executive vice president of Helix Electric Inc. The Mira Mesa company is the 10th largest electrical contractor in the nation, as ranked by Electrical Construction and Maintenance magazine, with 2017 revenue of $624 million. Helix has been growing. Revenue is up 19 percent from $525 million in 2016.

Helix is a full-service electrical contractor with no one area of emphasis. The company has learned how to do several types of projects.

Over the last 20 years, Helix has had a lot of work with multifamily high-rise buildings downtown.

Federal work has taken Helix as far away as Guam.

One of the company’s more unique, recent jobs was the NBC 7 broadcast studio in Kearny Mesa. “It’s not too often you do a new TV studio,” Jordan said of the project, completed in 2016.

Helix’s San Diego office oversees three other offices in California, two in Nevada, one in Hawaii, and an office in Chantilly, Virginia — a few miles outside the Washington, D.C., beltway. Complementing the San Diego office is a shop in Lake Elsinore for pre-fabricating components.

All told, the company has roughly 2,600 employees.

Helix is a non-union company, a fact that has rubbed some in the construction industry the wrong way.

The firm operates on a merit philosophy, said Mayra Martinez, the firm’s vice president of talent. As such, the firm attracts “very type-A, driven people.”

At the moment, Helix has 225 open positions, said Martinez. Her job, she said, is to go after “a dwindling pool of talent.”

Filling positions in Hawaii “has been a challenge,” she added.

Helix offers great benefits, Martinez said. Employees can choose from seven medical packages. She added that the average tenure at the company is 11 years. “That’s huge for a 35-year-old company.”

Helix is led by Gary Shekhter, who grew up under Soviet rule in Odessa, the port city in the Ukraine. Shekhter was able to immigrate to the United States in 1979. After several years of work with other electrical contractors, he founded Helix in 1985.

In the early days, Helix was “small, scrappy and driven,” Jordan said. “Even then, we were detail oriented.”

Helix used the recession years of 2008 through 2011 to make investments in estimating, marketing and training. Asked whether that might have been a risk, Jordan said no. “We knew the market was going to come back.”

Nowadays the United States is experiencing an extraordinarily long bull market. When the downturn comes, Jordan said, he feels Helix will be well situated.

San Diego has a “growing reputation” in life science and Jordan predicts future business in that market. On top of that, he said, UC San Diego is building on its campus.

Defense Department work will continue to be strong, he also said. Helix is a short distance from the Pentagon in its Chantilly office — a location from which it can reach the entire mid-Atlantic market.