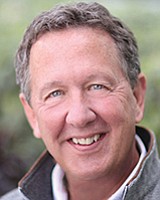 Viasat Inc. did not take the conventional path to developing the handheld radio known as BATS-D, which soldiers on the ground use to call in airstrikes on enemy positions.

It took the quick path.

The Carlsbad company sidestepped the usual Pentagon way of doing things to produce a handheld version of the Link 16 radio, a secure terminal that lets pilots, sailors and people on the ground share voice and data. More than just a radio, the device lets users keep track of friendly and enemy forces in near real time.

It took 17 months from the time Viasat engineers sketched the idea on a napkin (which they literally did) to the time they got the product in the hands of troops for testing, said Ken Peterman, who runs Viasat’s defense contracting business. It was a fraction of the time of the normal Pentagon development process.

Getting the Green Light

“You know, in a traditional context, we couldn’t move from validating the requirement to getting the money budgeted in 17 months,” the executive said, naming steps from the Pentagon procurement process. “And now we’ve got this equipment ready to go to the field and getting the green light to be deployed.”

Viasat spent $15 million to $20 million in developing BATS-D, Peterman said. That figure is low, however, since Viasat engineers also relied on a lot of the company’s “background” intellectual property.

In recent years, he said, industry is moving faster than government. Wireless phones went from second-generation to fifth-generation technology “way faster than the government acquisition and procurement process can move.”

“The government budgeting process is a three-year process,” Peterman said. “You’re budgeting now for something three years away. Well, in those 36 months, the private sector can move really quickly.”

While Viasat’s investors get a return on such projects, Peterman argued that first of all, it’s the right thing to do.

Soldiers and air personnel used advanced smartphones and information in the cloud during their teenage years, Peterman said. They go to the cloud to see what movie is playing. They should get the same capability when the military issues them equipment, he asserted.

Peterman said that before BATS-D, a pilot would have to fly over a village upside down to figure out which structure was the correct target — often while taking fire from the enemy. The new addition to the Link 16 radio system speeds the process and adds to the pilot’s confidence that he is striking the right target, the executive said.

BATS-D is just one example of how Viasat moving its commercial technology into military situations, the executive said. Viasat has provided in-flight internet — the same service it sells to civilian airlines — to military aircraft. Crews aboard the U.S. Marines’ Osprey tiltrotor aircraft can view streaming video from a reconnaissance plane, or participate in teleconferences (perhaps with a commander, or perhaps with a faraway doctor treating a wounded Marine).

In other news, during the second week of October, Viasat used a large U.S. Army conference to announce it is able to securely give soldiers access to cloud-based applications — specifically, artificial intelligence and machine learning applications — to help them take in information, assess battlefield situations and make decisions. Applications can be delivered through satellite communications or line-of-sight radio networks.

A Viasat statement made reference to using internet-connected devices on the battlefield in a concept called IoBT, or the internet of battlefield things.