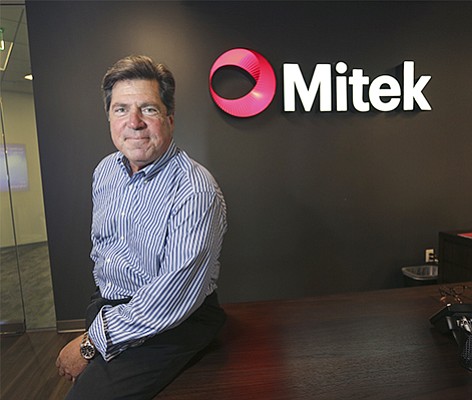 Mitek CEO James DeBello announced his departure on Aug. 28. He has worked with Mitek for 23 years, serving as its CEO for the past 15 years. File photo by Jamie Scott Lytle

Mitek Systems Inc.’s stock has not fully recovered since the company announced the departure of two of its top executives, CEO James DeBello and chief financial officer

Company description: Mitek is a software company best known for its work with mobile check deposits and identity verification.

Timing may have also been a factor for the company when it reportedly received a takeover bid from Florida-based IT company ASG Technologies, backed by New York hedge fund Elliott Management Corp. Reuters reported Mitek had turned down the offer for an undisclosed amount earlier this summer, and another letter from ASG in early October seeking to open merger talks.

Analysts said they were not concerned about Mitek’s core business but rather the abrupt and somewhat unexpected departure of the two executives.

“I think the concern with investors is who’s at the helm … all of those things when you lose someone who’s been there for a long time,” said Bhavan Suri, a partner with Chicago-based financial services firm William Blair & Co. “The business continues to execute. I think things are fine there.”

DeBello has worked with Mitek for 23 years, serving as its CEO for 15 of them. Early in his tenure with the company, he helped invent mobile deposit, the technology that allows users to deposit a check digitally simply by snapping a photo of it. His last day with the company is slated for Jan. 1, 2019.

Davison, who worked at Mitek for just over a year, will leave at the end of November.

Mitek affirmed both executives’ departures did not stem from any disagreement with the company, and they appear to be two separate matters, despite the timing.

According to a statement from Mitek, Davison tendered his resignation to work for a firm closer to his home in Bozeman, Montana.

Mark Schappel, an equity research analyst with the Benchmark Co. in New York, said Davison had spent the last year commuting back and forth between Bozeman and San Diego, where there are no direct flights.

The company did not provide a reason for DeBello’s departure.

“It was not expected,” Schappel said. “He kind of came up through the company.”

While it may have surprised investors, Schappel said the company had already been discussing a succession plan by the time of the announcement. Davison’s resignation may have sped up those plans.

“I suspect that his discussions with the board had been ongoing for some time,” Schappel said. “He had expressed an interest that he wanted to go do some other things.”

Now, analysts are watching to see who will lead Mitek next, and how they will guide the company through its next fiscal year, which began in October. Mitek has not changed its 2018 forecast of revenues between $62 million and $63 million. The company brought in $45.39 million in fiscal year 2017.

“Ultimately, we are not expecting major strategic changes at the company during the transition,” Suri wrote in a research note.

In particular, Suri is watching for how the company will manage relationships with its partners and will integrate newly-acquired companies. In particular, he is watching A2iA, the French artificial intelligence and image analysis company that Mitek purchased in May for $49.7 million.

That company will be part of Mitek’s newest foray into mobile identity verification technology.

In the interim, Mitek named its lead independent director, Bruce Hansen, to serve as chairman of the board. If the company does not name a new CEO by January, Suri expects him to fill that role in the interim.

“While we do not expect Mr. Hansen to assume the CEO or CFO role on a permanent basis, we are confident in his ability to run the business in the interim given the fact that he has been a director with the company since 2012, has an adequate level of familiarity with the business, and has an extremely credible background,” Suri wrote in a research note.