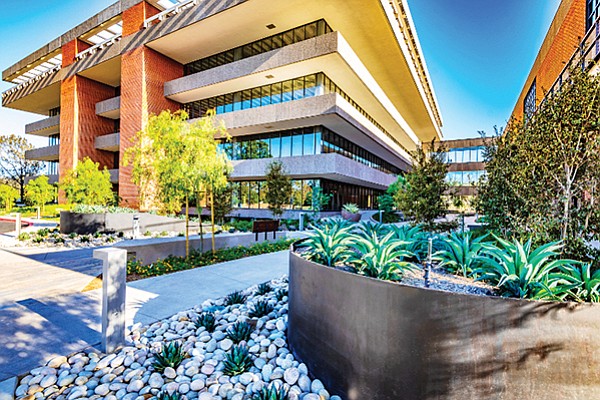 The five-story building that was once used for news and business operations has been converted to office space. Photo courtesy of La Jolla Visions/Javier Laos

Where grumpy newspaper editors and reporters once toiled as noisy teletype machines clattered in the background, an international financial services group will become the first tenant in Ampersand — the renovated former home of The San Diego Union-Tribune.

Encore Capital Group, headquartered in San Diego, is leasing the entire third floor of the two-buildings that were the heart of the newspaper — 90,000 square feet — including what was once the newsroom, along with a 5,000 square-foot portion of the first floor.

The $40 million transformation of the former newspaper building into Ampersand by The Casey Brown Co. was finished in September. 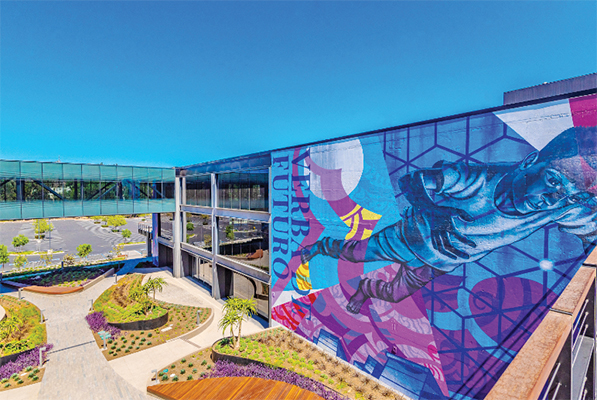 Murals have been added to the exterior walls of the former newspaper press building overlooking a new courtyard. Photo courtesy of La Jolla Visions/Javier Laos

Overlooking Interstate 8 and state Route 163 at 350 Camino de la Reina, “It’s such a prominently located building, you get a nice view all the way around,” said Matt Carlson, senior vice president of CBRE, which is handling leasing of the building.

“It’s not something that we could ever create from scratch with the character that’s there. It’s just unbelievably unique,” Carlson said. “It’s got a really cool history to it.”

The name itself — Ampersand — is recognition of that history. An ampersand is the last figure in a typesetter’s alphabet.

The wide-open spaces inside Ampersand were one of the big attractions for Encore, which will consolidate its San Diego operations in its new offices.

According to its website, Encore is an international specialty finance company with operations and investments in 15 countries. The company’s subsidiaries purchase portfolios of consumer debt from banks, credit unions, utilities and local governments and arrange payment plans with individuals.

With about 480 employees, the company expects to move in by next April.

A Good Fit for Encore

“Ampersand was chosen for its central location to where most of our employees live. But we also had a strong desire to bring all Encore employees together,” said Sheryl Wright, Encore senior vice president of corporate and government affairs.

“We are currently in two buildings with multiple floors and in two different locations within the city,” Wright said. “The Ampersand location was large enough to hold all of our employees on a single floor. We anticipate this will drive a greater collaborative culture.”

The general contractor on the project was CW Driver.

The most dramatic changes in the renovation have been made to the Press building.

Windows that are 12 feet by 30 feet were cut into the walls, a 15,000 square foot courtyard was built in the center of what is now a horseshoe-shaped building, and huge murals were painted on the exterior walls.

With the new windows, “You have these huge glass expanses that bring in a lot of light,” Carlson said.

“From an architectural feature, it finishes that building,” Brown said.

In another nod to history, metal tracks embedded in the floor leading into the pressroom that were used to haul giant rolls of newsprint into the building have been covered in epoxy and left in place.

Because the rolls of newspaper were so large, ceilings in the press room are unusually high at about 30 feet.

“It’s really impactful. It’s right where all the paper used to get stored,” Carlson said. “It’s a very dramatic space.”

In addition to office space, the Press building has a large outdoor fitness center that extends out onto what had been loading docks.

Creating lots of outdoor space was a big part of the renovation.

A new lobby and entranceway has been carved out of the west wall of the Stack building, replacing the former lobby which was on the north side.

Aside from the new lobby, the entire Stack building was gutted, maintaining a general industrial feel but leaving the finish work up to those who lease space in the building.

The building has wrap-around windows stretching from the floor to 14-foot ceilings.

A driveway that used to run between the Stack building and the Press building has been turned into an expansive courtyard with room for people to work.

A small building in the southwest corner of the site that had been a service station with a repair garage and gasoline pumps for the newspaper’s fleet of vehicles has been converted to office space for Brown’s company.

Ampersand comes to market as demand for office space in Mission Valley is rising.

The vacancy rate for Class A office buildings in the second quarter of 2018 — before Ampersand was completed — was 5.9 percent, and 6.5 percent overall among all building classes. Ampersand would be considered Class A.

“Mission Valley is really going through a renaissance,” Carlson said.

Now that Ampersand has a major tenant in Encore, Brown said he expects to have Ampersand fully leased within the next 12 to 18 months.

The remaining space can be divided into smaller segments, but the goal is to attract a few companies that would take big blocks of space.

“We’re trying to target some of the large users first,” Carlton said.