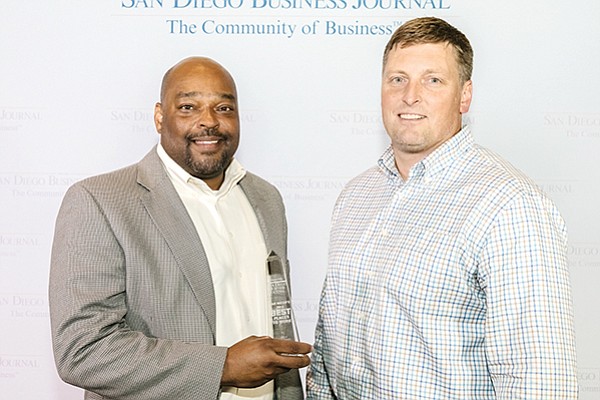 What they do: General contractor focused on health care, education, commercial and parking structures.

When people go to work for McCarthy Building Cos., they stick around.

“We’ve got a lot of people who stay with us for a very long time,” said Paul King, vice president of business development. “They understand the value of being here.”

With a nationwide workforce of 1,950 and a San Diego staff of 61, McCarthy Building Cos. was rated No. 1 by The San Diego Business Journal in the Best Places to Work Large Employer category (250 to 1,999 employees).

McCarthy Building Cos. has been employee-owned since 2002, and it’s that sense of ownership which King said is largely responsible for the high level of satisfaction among people who work at the company.

“We value each other as partners,” King said. “We have outstanding training programs and well thought-out and developed career paths well-identified and explained to staff members of all types.”

When someone starts work at McCarthy, regardless of their position, they’re sent to the company headquarters in St. Louis for orientation to learn about the company’s culture and meet others in the company, King said.

That culture includes an emphasis on achieving a work/life balance.

McCarthy Building Cos. has been named a Best Place to Work in multiple markets and was named one of the Healthiest 100 Workplaces in America by Healthiest Employers magazine.

“Good people are hard to find. We have a lot of great people that work for us. We want to make sure people are healthy and happy so they stay with us as a career,” King said. “Being a partner with folks, they’re more than just another employee.”

Toward that end, the company offers stress management workshops and “lunch-and-learn” classes on a variety of topics with the company providing free lunch for those who attend.

“It goes to the family feel, the family environment that we have here,” King said.

Hollis Gentry and Shawn Burkholder reflected on the company winning the honor.

Said Gentry: “This award is a great testament to McCarthy’s strong employee-focused core values of ‘Genuine,’ ‘We, Not I,’ and ‘All In.’  We live these values every day.  The Best Place to Work award makes me proud and honored to be a Partner at McCarthy Building Companies Inc.”

Said Burkholder:  “As employee owners, it’s great to validate that our coworkers/partners agree that McCarthy is the best place to work in San Diego.”

What they do: Engineering, architectural and construction services

C&S Cos. puts considerable effort into its employee engagement programs, which it tracks closely and ultimately measures in retention. The local office achieved a 1 percent voluntary departure rate in 2017. It sponsors a softball team and has company parties twice a year — once during the holidays and also with a summer outing.

A number of employee recognitions are given out throughout the year to highlight performance and community involvement.

A Founders Award was established to recognize staff members that exhibit the spirit of the company’s founders in their day-to-day duties, and the company recognizes community contributions. Locally C&S employees regularly donate time and funds to Feeding San Diego, Habitat for Humanity and homeless outreach.

Companywide benefits and initiatives include a profit-sharing plan and a program called C&S Universitys.

The company was the SDBJ large company category winner in 2017 for Best Places to Work.

What they do: software company whose platform generates marketing collateral for sales teams.

Seismic has managed to retain its employee-focused work culture even as it has grown in only eight years into one of San Diego’s biggest software companies with 560 employees spread across eight offices. The company has been on the Best Places to Work list for three consecutive years and founder and CEO Doug Winter was named SDBJ Most Admired CEO for large, privately held companies this past spring.

The company has a generous policy of allowing autonomous work schedules and a flexible sick time policy for employees to take as much time off as need to get well.

Its Del Mar Heights headquarters includes a game room with Ping-Pong, Cornhole, Darts, Xbox and AppleTV. It hosts barbecue cook-offs and an annual free-throw competition at a local rec center.

Seismic had a voluntary turnover rate of only 7 percent in 2017.

What they do: Service and administer workers’ compensation and liability claims.

The company has quickly established itself locally as a best place to work. Athens Administrators opened its office in San Diego in 2015 and by 2017 was No. 2 in the Large Company category.

The corporatewide employee of the quarter is awarded $1,000, and the top employee of the year wins $5,000. The company offers five medical plan options. Benefits include employee-sponsored elder care assistance. Employees have flexible work hours and are given a bonus for employee referrals.

The local office has a Wall of Fame, a monitor running all day offices with client appreciation notes, frequent potlucks, ice-cream socials and Wii tournaments. The company had a voluntary turnover rate in 2017 of only 9 percent. Employees can qualify for additional time off every quarter and participate in a team approach to wellness.

What they do: travel nursing staffing firm

The Medical Solutions LLC workday begins with a morning huddle, which is informative and can be fun, and often includes a Break Blitz, 20 minute fun activities that might include a cheesy game or some other stress reliever. The San Diego office also has teambuilding events in which the entire office leaves for the afternoon to hang out on the beach, go to a movie together or perform community work. The company also has a concierge service for dry cleaning, meal catering, childcare arrangements and automobile services.

The company has been named one of Staffing Industry Analysts’ “Best Staffing Firms to Work For” four times, including in 2016 and 2017 and a Modern Healthcare “Best Places to Work in Healthcare” in 2015 and 2016.

Employees of the Month are given a $250 bonus, certificate, and get to leave early on Fridays for the following month. There also is a corporate Circle of Excellence award with incentive rewards.