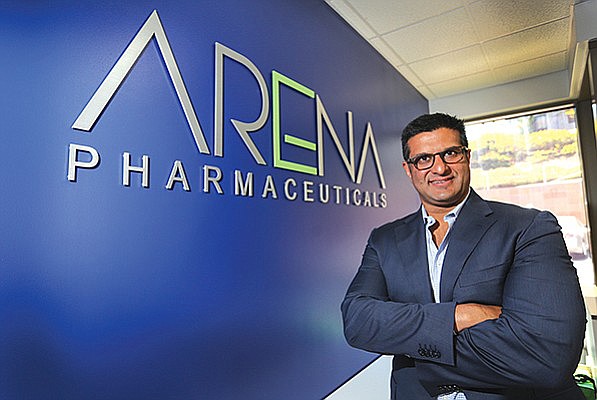 Arena Pharmaceuticals on Nov. 15 announced a drug licensing deal that provides the company with ample cash to devote to other medicines in its pipeline.

United Therapeutics gained the global rights to Arena’s ralinepag, a hypertension drug in late-stage testing, or phase 3. In return, Arena will receive up to $1.2 billion, including $800 million upfront and potentially $400 million in milestone payments. Should the drug win approval, Arena is eligible for royalties.

“It allows us to go deeper into some of these therapeutic areas with etrasimod. On olorinab it allows us to begin to think about more than one indication,” Munshi said in a Nov. 15 conference call with analysts.

In May, Munshi told the San Diego Business Journal that Arena planned to self-commercialize ralinepeg, which targets pulmonary arterial hypertension, or PAH. The rare disease is caused by high blood pressure in the arteries connecting the heart to the lungs.

But on the conference call Munshi said the funds would balance a portfolio heavy on late-stage drugs. It’s costly to build a sales force and finish drug development, often leading San Diego biotechs to partner with larger pharmaceuticals.

“In the spirit of you can do anything but you can’t do everything, we had to make some decisions about where we wanted to play. And that included the geographic footprint as well as the portfolio,” Munshi said.

While handing off ralinepag, Munshi said the company is committed to flying solo in commercializing etrasimod.

“We have the resources and the structure to get there.”

Arena had $561.6 million in cash and cash equivalents on hand as of Sept. 30, the company reported this month. Kevin Lind, the company’s chief financial officer, said during the conference call that Arena doesn’t plan to return to the market for financing.

“With significant upfront payment we see significant opportunity to invest in etrasimod more aggressively in ulcerative colitis and Crohn’s disease and broadly in up to 80 immunology indications including atopic dermatitis,” Birchenough and team wrote.

“We have conducted extensive due diligence on ralinepag, applying our two decades of knowledge about PAH,” Martine Rothblatt, CEO of United Therapeutics. “We are confident that after achieving FDA approval via at least one of its several potential regulatory pathways to success, this product will help greater than 10,000 patients annually from the 2020s and well into the 2030s, while complementing our existing portfolio of PAH therapies.”

Munshi, who took the reins in 2016 as part of a reorganization, has led a comeback at Arena after its weight-loss drug flopped. He’s overseen the reboot and advancement of shelved autoimmune drugs.