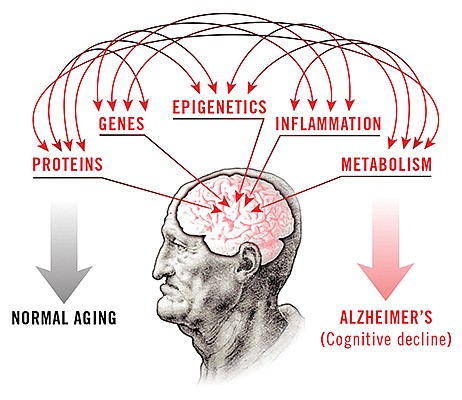 Salk researchers will look at how a domino-like crash in areas critical to brain health can trigger disorders like Alzheimer’s. Image courtesy of Salk Institute

A team of Salk Institute researchers has been awarded $19.2 million to study interactions among brain systems thought to underlie disorders like Alzheimer’s disease. Sparking new therapies is another goal.

The eight-year grant comes from the American Heart Association and Allen Institute.

“At the Salk Institute, we have devised a completely new way of approaching Alzheimer’s and aging research,” Gage said in a news release.

The news release goes on to say: “Salk research teams are developing cutting-edge methods to study aging and diseased neurons and other brain cells through cell cultures, brain organoids and a new primate model of cognitive aging. In addition to these technological advances, the team will use sophisticated machine-learning algorithms that can integrate diverse datasets, allowing scientists to identify the cell types and biological pathways most critical for brain aging.”

To date, there are no therapies to effectively treat Alzheimer’s. Pharmaceuticals have dumped billions into the disease, without much to show. Worth noting, though: Carlsbad-based Ionis Pharmaceuticals last year started clinical testing for a drug to treat milder cases of Alzheimer’s.