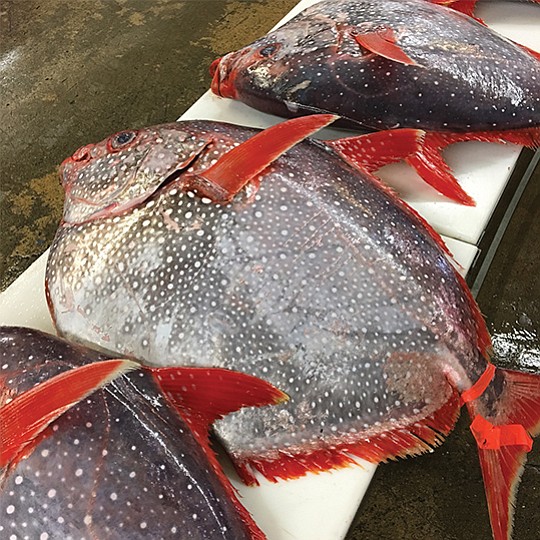 Opah, or “moonfish,” has seven distinct-flavored sections of meat inside and can weigh up to 200 pounds. Photo courtesy of Catalina Offshore Products

One fish, two fish .... The Dr. Seuss storybook title pretty much sums up how Dave Rudie came across his latest fish discovery: opah.

Rudie founded San Diego-based Catalina Offshore Products in 1977. The company offers seafood cut to order to restaurants and sushi bars. Four years ago he was contacted by fishermen in Hawaii who informed him they’d come across a really good location closer to San Diego to fish for tuna. So Rudie bought a couple of boats and began fishing for tuna there, but what he quickly found was that he’d also catch a lot of opah, a warm-blooded and lesser-known fish. In the commercial fishing industry, that’s known as a “bycatch.”

Opah is about the size of a car tire and often weighs almost 200 pounds. Rudie explains an opah has seven distinct-flavored sections of edible meat.

Inspired with the potential of his bycatch, Rudie was recently awarded $139,700 by way of the 2018 National Marine Fisheries Service’s Saltsonstall-Kennedy Grant Program. The funding will go toward a year-long project to help grow the demand for opah and other underutilized species as well as increase revenue for local fleets.

“It’s hard to get people to try new fish because they are already used to salmon and tuna and halibut. But, so far, we’ve been able to sell the top rack of the opah, mostly to restaurants and such, but that is only about 25 percent of the fish,” Rudie said. “There is all this other meat in the fish that is good protein, and we want to fully-utilize the entire fish. The goal is to reduce the number of discard when we land the fish, and, instead, educate, build interest and sell it.”

Some local chefs have already demonstrated interest and began experimenting with it, making the likes of opah burgers, opah-based poke and opah meatballs, to list a few, Rudie said.

Oriana Poindexter, a scientist working on the day-to-day operations of the project, says the first part of the development will consist of figuring out the biology of the opah.

“Since April, I’ve been collecting samples of the fish and bringing them back to the lab, where the team processes them for DNA analysis,” she said. “They are also looking at the life history, what the fish’s life is like, how long they live, where do they live, and what do they eat. I’ve been collecting samples of opahs’ stomachs and reproductive tracks and bone samples for aging.”

Poindexter adds that although opah is foreign to most North Americans, it has been eaten and enjoyed in Hawaii for many years. She describes some of the fish meat tastes like carnitas, some parts resemble ahi in flavor and texture, and another part tastes like beef.

Next on the Menu

While opah happens to be the most common bycatch in San Diego, it isn’t the only fish caught accidentally in these waters, say Rudie and Poindexter. As a result, part of the grant will go toward exploring other species, including blue shark, little mola, and barracuda. Poindexter hopes to get them in the hands of chefs with hopes of making these unusual fish something people want to eat.