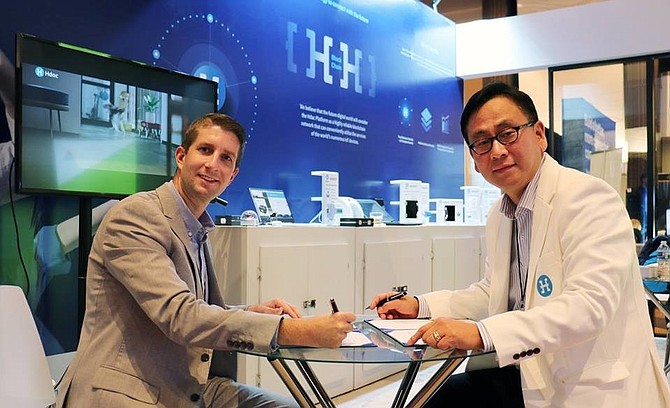 San Diego cleantech startup Conectric Networks LLC struck a partnership with Swiss blockchain company Hdac Technology AG. The two companies reached a memorandum of understanding on Nov. 12 that would allow them to develop and market their technologies together.

“This memorandum exemplifies our unique approach in this field,” Conectric CEO Phillip Kopp said in a news release. “We designed an IoT networking solution that is completely decentralized and integrated with virtually any software, making the blockchain solution an obvious fit.”

When it was founded in 2015, Conectric focused on using sensors and artificial intelligence to help hotels manage energy costs, by reducing the use of air conditioning, heat or lighting in unoccupied rooms. In the last six months, Conectric pivoted to offer its sensor solution across all different types of applications to help companies capture data for analytics.

“Because our original hotel solution required us to have such a high density of sensors, we developed a solution that scales to lots of sensors. That’s what’s set us apart in all of these different vertical applications — our ability to provide (companies) with way more data points at a much faster interval,” Kopp told the San Diego Business Journal. “A lot of companies have started approaching us from a lot of different verticals saying that’s exactly what they needed; they were having a hard time collecting enough sensor data to make applications work.”

The partnership will allow Conectric to combine its wireless sensors with Hdac’s blockchain platform to offer data collection as a service. The use of blockchain not only provides the guarantee that the data hasn’t been altered, but it also lets users pay for the exact amount of data they want to generate.

Some of the solution’s users include factories looking to improve their output and commercial real estate groups monitoring the use of flexible office space. Conectric also does some work in energy management, the company’s original focus.

“We’re very excited about it. Originally, as an IoT company, we thought about Blockchain as a feature,” Kopp said. “We’re starting to understand blockchain technology and software is an integral part of any IoT solution.”