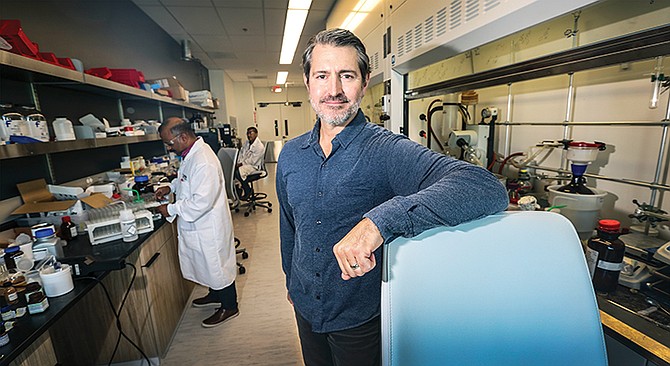 Forge and other San Diego biotechs are developing antibiotics for life-threatening infections called “superbugs.” Besides challenges in the lab, there’s the matter of tough-to-pencil-out economics.

This summer Switzerland-based Novartis AG joined a trend of drug giants leaving this kind of research. Novartis was scared away by the prospect of limited sales and steep costs to stay ahead of resistant strains.

Running counter to that narrative, San Diego superbug biotechs are armed with fresh funding, courtesy of talent with a track record in the space. In addition, regional research institutions have won bacteria research grants, feeding biotech with talent and potentially breakthroughs.

Leaders of these companies acknowledged a difficult funding landscape, while simultaneously encouraged by potential reforms to speed up antibiotic development. And they’re confident the growing need for new antibiotics will put a premium on their work.

“There are thousands of people who are getting sick and actually dying from infections that a couple of years ago we were able to treat. This problem isn’t getting better. It’s getting worse,” said Forge CEO Zak Zimmerman.

Forge last year raised a $15 million Series A round. Around that time, Forge also took in $8.8 million from Carb-X, a public-private partnership funding new antibiotic development.

The $8.8 million was the largest grant last year from Carb-X, which awarded 11 grants out of 168 applications.

Forge is developing new classes of antibiotics, critical because most classes were developed decades ago, and resistance emerged. The company emphasized the point among investors waking up to the business potential.

The company’s lead program, LpxC, killed gram-negative superbugs in animal models. Forge estimates the drug candidate could hit the market in five years. By then the company expects a sea change.

“In two, three, four, five years — are generics going to work anymore? The answer is they’re not going to work as well. They may not work at all,” Zimmerman said. “The market will respond to a drug that saves people’s lives.”

The Centers for Disease Control and Prevention estimates that at least two million people in the U.S. annually develop serious infections caused by antimicrobial-resistant pathogens. And, at least 23,000 people die as a direct result of these infections. The number could mushroom without action, experts say.

Besides Forge and Cidara, Qpex Biopharma looks to be another major player locally. Last month, Qpex surfaced with a $33 million Series A round and a federal contract worth up to $132 million to combat superbugs.

Worth mentioning as well: AmpliPhi Biosciences, taking on antibiotic-resistant bacterial infections. As a reminder of the difficulty of developing antibiotics, the company’s stock declined further last month after a public offering.

Why does San Diego have a cluster of companies in a decidedly unpopular space? Company executives cited advances in recent years — and talent that stuck around from earlier antibiotic companies based here.

Merck, which in 2014 bought Cubist for $8.4 billion, is one of the few pharmaceuticals still in antimicrobial research.

Only five of 16 brand-name antimicrobials approved between 2000 and last year earned more than $100 million in annual sales, according to a study from Duke University’s Margolis Center for Health Policy.

At least for now, generic antibiotics are inexpensive and widely effective, making them the first line treatments.

Some aren’t convinced biotechs can take up the antibiotic mantle. Erik Gordon, a clinical assistant professor at the University of Michigan’s Ross School of Business, called the idea “somewhat of a head-scratcher.”

“Biotechs have shown over and over they can do the science that the big pharmaceuticals companies can’t do. But here that’s not what we’re talking about. You’re talking about a difficult revenue model,” Gordon said.

In September U.S. Food and Drug Administration Commissioner Scott Gottlieb talked of reimbursement reforms to incentivize new antibiotics. One possibility: hospitals paying a subscription fee for antibiotic doses, rather than a per-use basis.

“These subscription fees could be priced at a level to create a sufficient return on the investment to develop drugs with a certain profile,” Gottlieb said. “This is similar to the way that software often gets reimbursed, where institutions pay a licensing fee for a fixed number of installations.”

The FDA is discussing changes with Centers for Medicare & Medicaid Services, which sets reimbursement policies.

Qpex Pharmaceuticals CEO Mike Dudley said with big pharma leaving, biotechs battling superbugs will need to take drugs further into the pipeline and rebuild commercial channels. For this to make business sense, he added, a biotech must advance several drug candidates, not just one.

“We’re not sitting around yearning for big pharma to get back in the game,” Dudley said.

Qpex’s aforementioned $33 million round is going toward a portfolio of antibiotics to fight drug-resistant infections. Instead of developing new antibiotics, the company’s approach is to combine what are called beta lactamase-blocking drugs with existing antibiotics.

As testament to the federal government’s increased attention on superbugs, Biomedical Advanced Research and Development Authority, or BARDA, awarded Qpex $32 million in 2016. An additional $100 million is possible.

UC San Diego this summer also launched a bacteriophage therapy center, embracing a 100-year-old method dropped in the 1930s with the advent of modern antibiotics. But bacteriophages — viruses that specifically target and consume bacteria — are getting a fresh look with the rise of superbugs.

Andrei Osterman, a professor of bioinformatics who has studied bacterial resistance at Sanford Burnham Prebys Medical Discovery Institute, said academic grants seem to be minimal in the space. That includes both experimental early-stage research and translational research, the latter of which is key for attracting biotech interest or for spinning out companies.

“I think there’s a disconnect there,” Osterman said. He added researchers have made notable strides in recent years, like sequencing the genomes of resistant microbes to gauge their evolution.