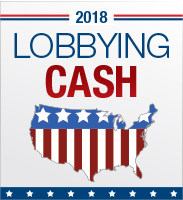 Every year, San Diego defense and aerospace companies spend six-figure sums on lobbyists, who represent their clients before government leaders in Washington, D.C.

In the case of General Atomics, expenses run into the millions of dollars.

Such spending comes on top of contributions to politicians’ campaigns.

The Washington-based Center for Responsive Politics collects data from the federal government and publishes figures on both lobbying expenses and campaign contributions. Its website is called Open Secrets.

The lobbying numbers pertain to amounts spent pleading one’s case before members of Congress, their staffs and members of the executive branch.

Major defense contractors “always do extensive lobbying in D.C. because their bottom line is so strongly influenced by decisions made there, in Congress and the executive,” said Gary Jacobson, professor emeritus of political science at UC San Diego.

Defense contractors want to know what the customer wants, and want to keep tabs on the “millions of things” the federal government is up to, Jacobson said.

Lobbying is also defensive. If competitors lobby, “you’re going to lose out” if your company does not, the professor said.

General Atomics, which splits its business between defense contracting and energy, spent $4.78 million on lobbyists in 2017, the last full year for which numbers are available. Lobbying amounts have risen steadily every year since 2010, when GA spent slightly more than $2 million.

General Atomics has a variety of federal contracts. Its Aeronautical System affiliate makes the Predator family of remotely piloted aircraft. Its Electromagnetic Systems business is developing and building a new class of aircraft launch and recovery equipment for the new Gerald Ford-class aircraft carrier, among other pursuits. General Atomics also does research and development in nuclear power.

In 2018, the business has lobbied for 21 bills, including appropriations bills for the Defense Department and other federal agencies.

GA is not alone in spending on lobbyists.

Viasat Inc., which serves the defense industry as well as commercial and consumer clients, has increased spending dramatically since 2009, when the company spent $10,000 on lobbying. In 2017, Viasat spent $690,000 on lobbying services, marking a peak for the last 10 years. Spending for the current year was $650,000 as of October.

Viasat (Nasdaq: VSAT) has grabbed headlines for launching its own high-capacity satellites. It also offers secure communications and cybersecurity for members of the military. Viasat’s satellite Wi-Fi serves VIPs aboard federal government jets, and serves passengers on commercial flights.

Donating money to a campaign will not guarantee you get what you want, but it can get you access to politicians, Jacobson said.

Organizations and individuals associated with Cubic Corp. also made campaign contributions. Hunter was the largest individual recipient, with $11,000 received during the 2018 cycle. In all, Cubic gave $195,000 to candidates, $17,500 to leadership PACs and $83,000 to political parties.

Individuals and organizations affiliated with Viasat gave $5,950 to candidates, $1,000 to political parties and $250 to outside groups during the 2018 election cycle. Rep. Darrell Issa (R-Vista) received the largest individual donation of $2,800.

A partial guest list from a late April get-together at the Rayburn House Office Building appeared in the Politico Influence Newsletter dated April 27. Kratos CEO Eric DeMarco hosted a bipartisan group of legislators from all over the United States. Representing California were Hunter as well as Rep. John Garamendi, a Democrat.