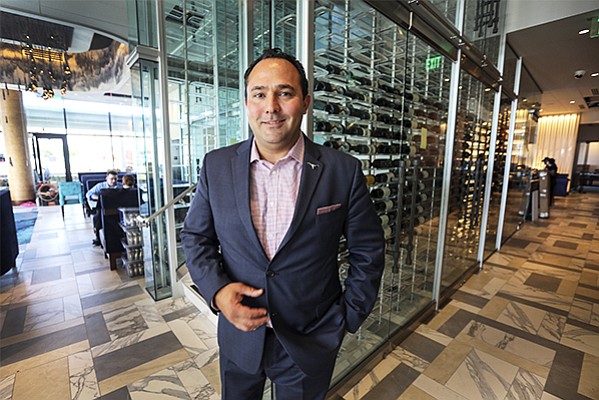 For some time now, the buzzing area, near the San Diego Convention Center, Petco Park, the Gaslamp Quarter and the harbor, has been a hub for trendy restaurants, but especially steakhouses, running the gamut between chain extensions like Ruth’s Chris Steakhouse to locally-grown ones like Morton’s The Steakhouse and Lou & Mickey’s. A search for steakhouses in ZIP code 92101 in San Diego will yield over a dozen results of high-end chophouses that include Fleming’s Prime, STK San Diego, Greystone Prime Steakhouse & Seafood and Born & Raised. Now, with Del Frisco’s, which was set to officially open its doors Nov.3, it raises the questions: Is the zone oversaturated with eateries that specialize in steaks and chops?

“I think there is room for everyone,” said Sara Arjmand, general manager of Greystone. “For San Diego being a small town, it’s actually a pretty big town in many ways. If you want a location near the water that is scenic, that may be reason enough to set up here. We get a lot of the convention crowd, as well. And, with San Diego being a destination place, when people think of a great night out or a date night, they usually think steakhouse.”

Miro Copic, marketing professor at San Diego State University, says the convention center is definitely a major push for steakhouses to set up shop in the neighborhood.

“The more conventions there are there, the more opportunity there is for the restaurants surrounding it,” he said, adding although convention attendees are a major driver of revenue for locations in the vicinity, the steakhouses have to build a following among San Diegans as well so that they can make the short list as opposed to one-and-done. “It will also depend on the menu items, the quality of the food, the pricing and, of course, the ambience.”

According to the San Diego Tourism Authority’s Visitor Industry Performance 2018 report, the number of conventions held in San Diego by August was 51. About 457,000 people attended those conventions and spent $479.3 million in the county as a result.

To Copic’s point, Manoocheri says Del Frisco’s, with its oceanlike blue hues and browns and copper to represent beach sand, is banking on its atmosphere. 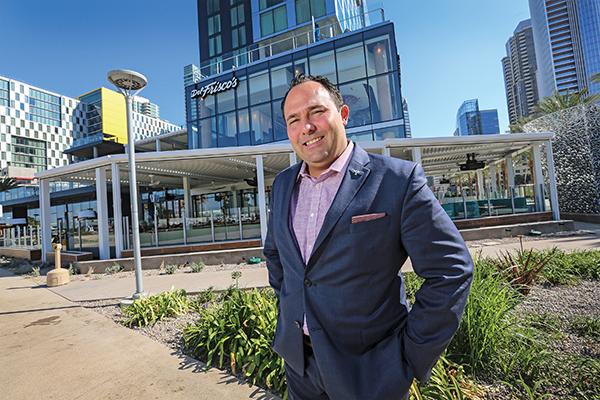 Michael Manoocheri says the newly-opened Del Frisco’s Double Eagle Steakhouse will seat approximately 480 guests at any given time, with more than half of the seating capacity in its outdoor area.

“Everything we do is big and bold, from the steaks to the award-winning wine list of over 1,400 selections, to the sophisticated details and the ambience,” said Manoocheri. “We try to take things in from the guest’s point of view and the staff’s point of view, and we ask ourselves: Is this functional to work in? Is it comfortable for guests? Of course, our service is part of that.”

Manoocheri says Del Frisco’s research team took the time to visit other steakhouses in town which helped it make decisions the team hopes would make the restaurant a top and recurring choice for locals and visitors alike.

“There are so many great restaurant companies out here in general, and a lot of those are steakhouses, but, I feel there are plenty of savvy diners in San Diego that are discerning and are probably willing to try us,” said Manoocheri. “All these restaurants have great services. But, we take the service and turn it into hospitality. That translates into a state of mind and how you are made to feel.” Manoocheri said. At the end of the night, the staff at Del Frisco’s hand-writes thank-you cards to send to those guests whose addresses they have on file.

King Signature Group’s vice president of operations Mark Augarten, who oversees the Lou & Mickey’s location, says on top of offering its guests what he describes as “an approachable steakhouse atmosphere,” the restaurant is currently building a Himalayan sea salt dry-aging room. Set to open in December, the room will allow the eatery to also have more control of the cut of meat it offers.

“It will be an illuminated wall of Himalayan sea salt that will help extract moisture from the room to the meat, so the flavors will be intensified,” Augarten explained, adding the restaurant also has what it calls a very successful “shareable program,” which allows guests to order multiple types of steaks and share with those at their table.

“Another important part of the process will be air flow, so, we’ve spent a lot of time installing specific fans inside the room. To control the meat every step of the process — we can age from 30 to 45 to 60 days, and we are even experimenting with 90-days — it doesn’t get any better than that.”

One thing’s for sure, many say they welcome the friendly competition that Del Frisco’s will bring to the waterfront.

Read More: Standing Out From The Herd Downtown