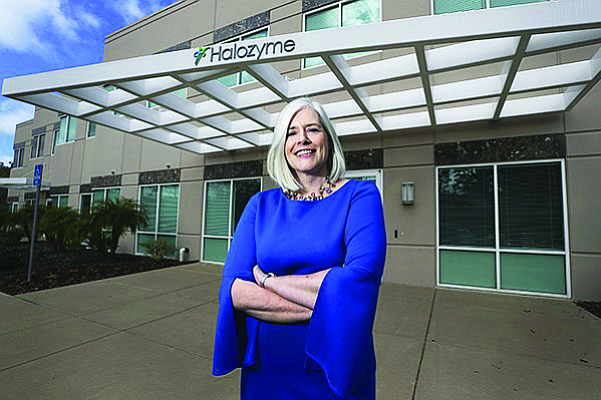 Description: The company makes a successful drug delivery platform, and it’s in final clinical trials with a cancer drug.

Halozyme Therapeutics is expanding the reach of its platform that delivers drugs under the skin, intended to do away with lengthy infusions.

San Diego-based Halozyme will receive $25 million through licensing its drug-delivery technology, Enhanze, to Swiss pharma Roche, with the potential for a much greater haul, it was announced Oct. 30.

Roche will draw on Halozyme’s platform for the development of an undisclosed clinical-stage therapeutic target, with the option of up to two more targets within four years. Along with the $25 million upfront, the deal includes potential milestone payments of up to $160 million to $165 million per target and mid-single digit royalties on potential drug sales.

In addition, Halozyme will receive an undisclosed nomination fee for each of the two additional new target nominations.

The agreement further binds Halozyme and Roche, which first licensed Enhanze in 2006.

Enhanze enables drugs to be absorbed subcutaneously, which is speedier than intravenous infusion. In addition, a novel formation involving Enhanze can extend a product’s patent.

CEO Helen Torley said in the beginning Roche and other Enhanze partners sought to ward off competition from biosimilars, cut-price copies of drugs. But these days Enhanze customers are seeking benefits like subcutaneous delivery — and turning to the platform at earlier stages of development.

“Now we see (Roche) moving earlier in their pipeline as they embrace all the value of Enhanze,” Torley said in an interview.

The company expects nine therapies using its technology to be in clinical trials by year end. On the back of Enhanze deals, Halozyme reported $316.6 million in 2017 revenue, an increase of 116 percent from the prior year, and up 134 percent from 2015.

Halozyme forecasts nearly $1 billion in Enhanze royalty revenue by 2027. But the company’s bigger play is a cancer drug in final clinical trials.

“We see potentially attractive royalty streams to Halozyme, which we see representing a potential source of upside for the stock over time,” said Fye in an Oct. 30 research note.

Halozyme expects to recognize the $25 million upfront payment in its fourth quarter.