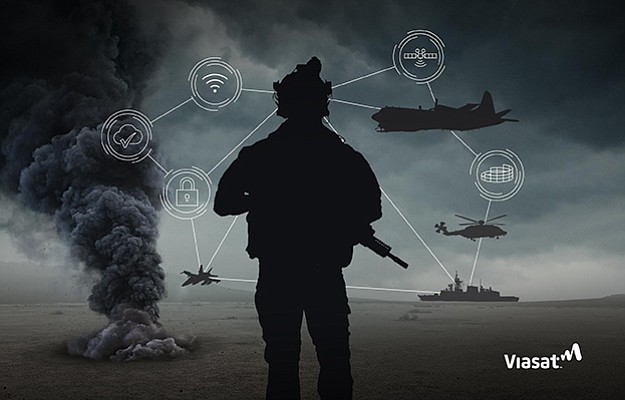 An illustration shows Viasat’s vision of a soldier connected to his unit through telecommunications. The company wants to deliver cloud-based applications to the soldier. Rendering courtesy of Viasat Inc.

Viasat Inc. plans to deliver artificial intelligence and machine learning to soldiers on the battlefield. The question I had was why.

In a Third World outpost with no clean drinking water and an unstable supply chain for essentials (gasoline, ammunition), artificial intelligence would seem to be as much of a luxury as organic cotton bedsheets and throw pillows.

But there it was in an Oct. 9 announcement: the company plans to give soldiers on the move access to secure, cloud-enabled artificial intelligence and machine learning applications — using its global satellite communications architecture, or using line-of-sight tactical networks

What on Earth would a soldier, or a Navy SEAL, do with that capability?

We don’t know yet, said Ken Peterman, president of the government systems business at Viasat (Nasdaq: VSAT). But it might be something essential, such as making a soldier or a SEAL better aware of his surroundings.

What if, Peterman said, an unmanned aircraft was flying above a village, sending images to a computer in the cloud? And what if a computer could determine that on that particular day, something was out of order, something was different? It could be that the villager who normally swept his rooftop at the same time every day had been replaced by a taller person, who seems to be holding a rifle instead of a broom. “The pattern is different,” said Peterman.

Such “proactive tipping and cueing” could be an asset to soldiers on the ground, the executive said. It could provide “game-changing capability.”

Viasat showed off the technology at AUSA 2018, the Association of the U.S. Army conference, in early October in Washington. By Peterman’s account, convention-goers were eager to try out Viasat’s display electronics. People with packed convention schedules returned around suppertime for a better look.

Viasat is trying to “unleash people’s creative energies,” said Peterman. A soldier might want apps to find out what’s beyond his sight in a particular direction, or what his buddies are doing.

Peterman returned to a theme I have heard him speak on before, and it’s an intriguing sales pitch: Young people in uniform used advanced information technology to inform their lives before they went into the military — to find their friends, for example, or to see what movie was playing at the theater. Why shouldn’t they use it to do their jobs in the military, in stressful situations?

True, the Defense Department doesn’t have a formal way to buy such a capability. But Peterman thinks the Pentagon can adapt.