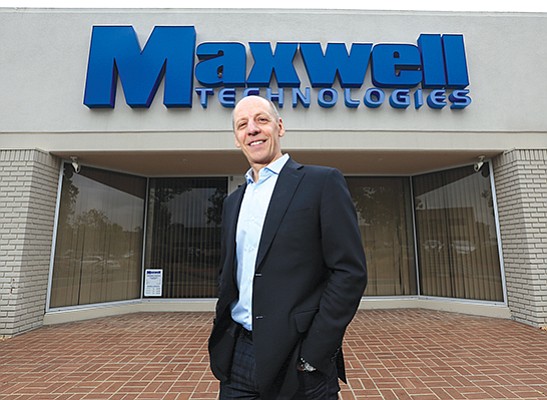 Franz Fink, president and CEO of Maxwell Technologies Inc., based in San Diego, is hopeful he has the company right in the middle of some megatrends that finally kick off. Photo by Jamie Scott Lytle.

San Diego — It seems San Diego-based Maxwell Technologies Inc., which develops and manufactures ultracapacitor-based energy storage and power delivery solutions, has both hands on the wheel when it comes to providing that technology to the automotive industry.

To date it has provided 6.1 million ultracapacitors for use in the automotive industry, including to such companies as Peugeot, Citroen and Lamborghini. And now it will add Volvo to the mix.

In May, Maxwell (Nasdaq: MXWL) announced it had formed a technology partnership with Zhejiang Geely Holding Group (Geely).

According to Franz Fink, Maxwell’s president and CEO, the deal is the “biggest, most significant in the history of Maxwell.”

The $100 million deal with Geely, the parent company of Volvo and Geely Auto, is to integrate Maxwell’s ultracapacitors into the auto group’s mild-hybrid and plug-in hybrid vehicles beginning in 2019.

It also serves as a validation for the company’s technology, according to Fink, who joined the business in 2014.

“It validates competence and a knowledge of our team,” he said. “So we are in the core architecture for Volvo/Geely, but also, initially in five vehicles slated to launch in late 2019, then ramping in 2020 and beyond with lifetime $100 million, which is very, very significant.”

Where the Company Can Grow?

With the majority of its research and development done at the company’s San Diego headquarters, Fink said it is now more focused on creating system solutions, not just building ultracapacitor components, but complete integrated modules for all sorts of applications.

He believes that with the Geely/Volvo deal, there is growth in the company’s future, including in its workforce and the potential building of a pilot lab for lithium-ion battery type of core electro-technology over the next 12 to 15 months.

Fink said the company will be looking to various partners to help with what he called, “very substantial investment,” amounting to $20 million to $40 million over the next few years.

Fink is forecasting the ultracapacitor industry to grow over the next five years by a component growth rate of 20 percent.

Other industry studies are showing similar growth numbers. Stratistics MRC, a market research consulting firm based in Maryland, said the global automotive ultracapacitor market is growing at a compound annual growth rate (CAGR) of 18.6 percent during its forecast period from 2016 to 2023. Grand View Research, in San Francisco, is expecting the ultracapacitor market to reach beyond that, hitting a CAGR of more than 25 percent over the next eight years.

While automotive makes up the majority of business for Maxwell, energy storage is another industry where the company is looking to incorporate its technologies.

Closer to home, Maxwell is also collaborating on a project in Borrego Springs with San Diego Gas and Electric (SDG&E).

Fink said the two companies are looking to put ultracapacitor energy storage capabilities next to batteries to capture solar energy or wind energy, and then distribute it.

“Where we come in...is battery storage energy,” he said. “As you have more demand versus energy available or vice versa, we basically make sure that you have a very, very constant voltage integrate, which is critical.”

In 2017, Maxwell acquired Nesscap Energy Inc., a South Korean-based ultracapacitor company for $23.18 million. In the same year, the business also underwent a restructuring, including reducing its headcount, embarking on a cost-containment campaign and consolidating its manufacturing and supply chain, according to previously published reports.

This year, Maxwell announced total revenue of $28.4 million for its first quarter, down when compared with $30.8 million for the fourth quarter of 2017 but above the $26.7 million for the same quarter the prior year, according to a news release.

However, the company’s restructuring and acquisition of Nesscap have worked out very well, according to Fink.

“There are other challenges like everyone has... as you build a strategy to go from component to systems supplier — there’s only that much you can do organically,” Fink said. “We have been building a very strong R&D team here in San Diego. We’re going to continue to build on that R&D team — all from material science to component to systems development to grow with us here in San Diego.”

At the end of the day, the most important thing is that you have a nucleus of a technology that is differentiating, and a very capable world-class team that very well understands to develop and evolve said technology, Fink explained.

“Without that...core, you will go nowhere,” he said. “Whenever you are the leader, very early in the market, you see very early traction,” he said. “But as you are in markets, maybe in the early stage of development, certain things ramp, then they slow down, and it just takes some time until you’re right in the sweet spot of a megatrend that finally, really is going to take off.”

Fink added that he’s very confident in what they are doing at the company, not only with Volvo, but with its other customers.

He’s hopeful the company is right in the middle of some megatrends that finally kick off.