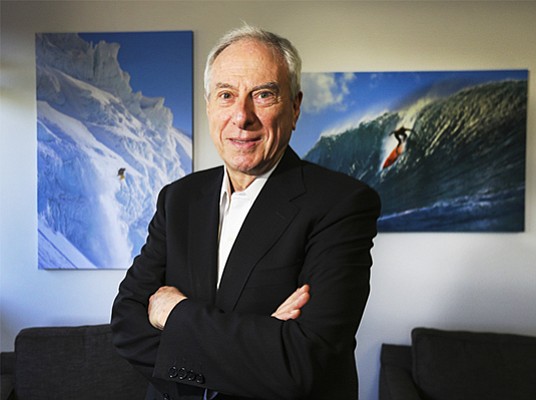 KnuEdge CEO Dan Goldin, photographed in 2016, is the former head of the National Aeronautics and Space Administration. He started the company in 2005. KnuEdge made its public debut in 2016. Photo by Jamie Scott Lytle.

San Diego — A San Diego company that emerged from stealth mode with $100 million nearly two years ago after a decade of developing artificial intelligence technologies may be forced to close due to a lack of funds.

CEO Dan Goldin, the former head of the National Aeronautics and Space Administration, started the company in 2005. But KnuEdge, previously called Intellisis, didn’t make its public debut until 2016.

The company said it had developed a neural chip and military-grade voice recognition and authentication technology. But since its showy coming out,

KnuEdge has retreated from the public eye. In 2016, Goldin said the company had raised $100 million from investors who didn’t want to be named, and that it had already recorded $20 million in revenue.

But it was a separate anticipated investment of more than $20 million that, when it failed to materialize, pushed the company into financial difficulty, according to KnuEdge chief of staff Joy Shin.

“It was just bad timing,” she said.

KnuEdge told the California Employment Development Department (EDD) it planned to lay off its 30-person workforce as of May 25.

“The planned action is expected to be permanent and is part of the company’s plan to wind down its current business operations,” said Goldin in the letter, dated March 22.

Under the state’s Worker Adjustment and Retraining Notification Act, employers that anticipate a mass layoff or closure are required to notify employees at least 60 days in advance.

“We’re in that two-month period right now, but thereafter, for those who remain with the company, who either aren’t pursuing another job or we are asking them to stay, there’s a good probability that there will be a remaining team beyond this two-month period and they’ll be doing everything that is possible to ensure success going forward, whether it is via acquisition or investment,” Shin said.

Shin spoke with the San Diego Business Journal in early May; Goldin wasn’t made available for an interview.

The company is seeking additional investment or an acquirer. Barring that, the company may also consider selling its IP, she said.

She declined to discuss the status of the initial $100 million financing.

When Goldin first began speaking publicly about KnuEdge’s goals, he said locating the company in San Diego, rather than Silicon Valley, was an acknowledgement that its work would likely take longer to result in financial reward than Bay Area investors and employees would be willing to countenance.

Goldin believes that decision was the right one, based on the support the company is getting from its local champions in the form of connections to potential investors and acquirers in its time of need, Shin said.

The company is closely associated with the San Diego branch of the California Institute of Telecommunications and Information Technology (Calit2), the academic research institute run jointly by UC San Diego and UC Irvine. The UC San Diego center is also called the Qualcomm Institute.

Calit2 Director Larry Smarr said in June 2016 that the institute planned to use KnuEdge’s technology to augment its big data analytics efforts. Smarr declined to comment on the company’s pending layoffs.

The UC San Diego-KnuEdge relationship dates to before the company began talking about its work publicly.

The institute and Goldin’s team collaborated to develop a processor architecture to improve the performance of machine learning and artificial intelligence.

Engineers at the UC San Diego institute, including Doug Palmer, then a principal development engineer, worked on the effort. Palmer later left to become KnuEdge’s chief technology officer – a role he continues to hold today. Palmer routed a query on the changes at the company to Shin.

A few months after KnuEdge’s public debut, the institute and the company announced they would jointly host a workshop on “neural” networks, which are modeled after the way in which the brain thinks.

Today AI has advanced to the point that it can beat out world poker champions and enable humanoid robots to land a perfect back flip, said intelligence firm CB Insights in a recent report on the top AI trends to watch in 2018.

“AI algorithms are far from perfect in basic tasks that are easy for humans, such as understanding a scene in an image or recognizing a conversation’s context,” the report said. “Meanwhile, the promise of general AI — or artificial intelligence that can quickly learn new tasks without supervision — remains uncertain.”

Still, companies across industries are incorporating or developing AI tools tailored to their needs.

CB Insights tracked more than 300 AI startups in incubators in 2017, three times the total the year prior. And the organization said investors funneled 141 percent more dollars - more than $15 billion - into AI startups than in 2016.

The biggest names in tech, including Google and Amazon, also have AI projects, and are paying top dollar for specialists in the field.