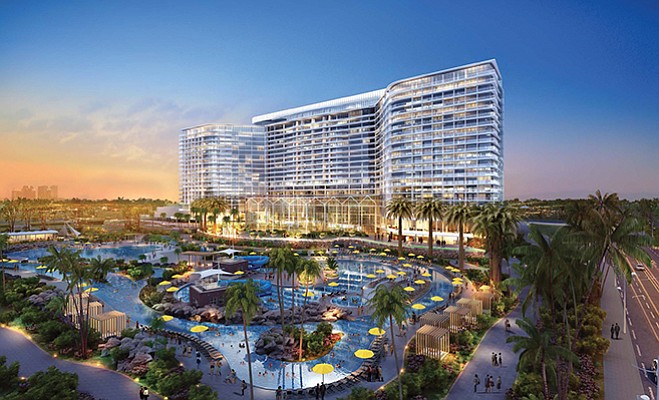 Rendering shows what a Chula Vista bayfront hotel and convention center might look like. Rendering courtesy Port of San Diego

San Diego — At long last, after more than 25 years of talk and false starts, a $1.1 billion resort hotel and convention center on Chula Vista’s bayfront may be close to becoming a reality.

“I am really, really hopeful this time and I’m a lot more positive than I’ve ever been before,” said Chula Vista Mayor Mary Salas. “There are still steps to be done, but we’re so much closer to seeing the actual development go forward than we ever were.”

The reason for Salas’ optimism is a disposition development agreement, called a DDA, signed in April by the Chula Vista City Council, the Port of San Diego and RIDA Chula Vista LLC — the company that would develop a 1,600-room hotel and 275,000 square-foot convention center on a 36-acre site west of Marina Parkway between H and G streets.

The agreement commits RIDA to building the hotel and convention center, requires the city and Port District to make related infrastructure improvements, and sets forth financing plans for the project.

The hotel and convention center would be operated by Gaylord Hotels, the convention hotel brand of Marriott International.

Officials estimate the project would generate $1.3 billion for the region’s economy during construction and create more than 2,300 jobs with a long-term annual economic impact of $475 million and create 4,470 permanent jobs.

Ann Moore, Chula Vista’s representative on the Port of San Diego Board of Port Commissioners shared Salas’ optimism about the project.

The port owns the land on which the convention center and resort hotel will be built.

“This is the closest we’ve ever been. Absent anything really bad happening, I just can’t imagine this won’t go forward,” Moore said. “To me, it’s personally an historic moment for the city of Chula Vista, for the whole South Bay.”

Getting the Ball Rolling

Moore said the resort hotel and convention center would be “sort of the catalyst” toward development of the 535-acre bayfront as outlined in a master plan approved by the California Coastal Commission in 2012.

“It’s the cornerstone for development to occur,” Moore said. “I feel confident about it and I feel the approval of the DDA has bolstered my confidence. We have a game plan in which the city, the port and the developer know exactly what steps we need to take in order to make this project happen.”

“We at RIDA are very excited and appreciative for the opportunity to create a transformational convention resort on the Chula Vista bayfront,” Mitzner said.

Construction of the hotel and convention center could start as soon as 2019, with public infrastructure improvements first up with new public streets, utility services and a new harbor park.

The hotel and convention center itself would likely take “upward of four years” to complete, with a target date of 2024 to be open for business, said Adam Meyer, senior asset manager at the Port of San Diego.

“In order to attract other developments at the bayfront, we really need to get this major hotel and convention center built,” Meyer said.

In addition to the 1,600 room hotel and convention center, the development agreement gives RIDA the ability to develop a smaller hotel across the street from the larger project, said Chula Vista Economic Development Director Eric Crockett.

“It’s going to give them an exclusive right to negotiate with the port for one year what that hotel would be,” Crockett said.

The idea is that the smaller hotel would offer rooms at prices lower than those at the convention center hotel and handle overflow from the project, Crockett said.

The overall hotel/convention center project has had a troubled history, dating back at least to the 1990s.

Mayor Salas said part of the problem was that people from time-to-time would propose developing separate parcels of property along the bayfront rather than looking at the bayfront as a whole.

“It was like the tail wagging the dog,” Salas said.

The closest the bayfront project came to becoming a reality before stemmed from a 2005 proposal by Gaylord Entertainment Co. to build a hotel and convention center.

In 2008, Gaylord announced it was terminating its plans for the Chula Vista project, citing what the company said was a prolonged planning and approval process, a complicated regulatory and legal structure, and off-site infrastructure costs.

“When Gaylord left the first time, we kept moving forward with entitling the overall bayfront project,” said Meyer, with the Port of San Diego.

In 2014, a new request for proposals was issued, and the Houston-based RIDA was the only qualified developer to respond.

“We have an approved plan that was approved unanimously by the Coastal Commission, we have a final EIR (Environmental Impact Report) that’s been certified, we have a settlement agreement with environmental groups and interested stakeholders so we have an agreement with what all the parties expect, and we have an amazing developer who really has a vision of what the Chula Vista bayfront will be,” Moore said. “This time, it’s going to stick.”