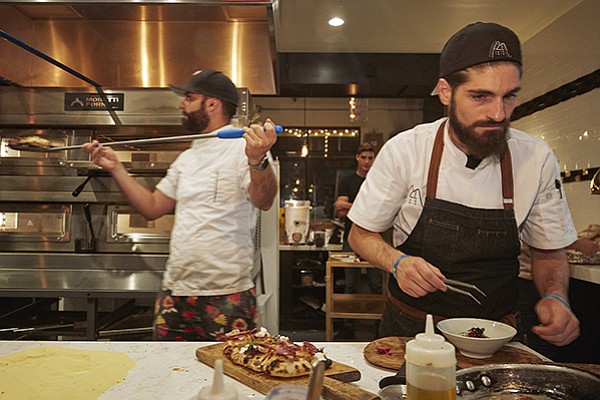 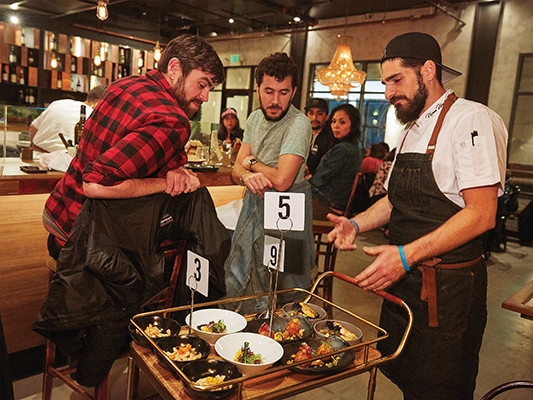 The 2,000 plus square foot space eatery is located in what was formerly a NaPizza outlet at The Hub Hillcrest Market, 1040 University Ave. A soft opening occurred March 8.

Maestoso and Ercolani haven’t seen other restaurants practicing a chef-to-table concept similar to their restaurant except for State Bird Provisions in San Francisco.

Tonya Whitfield, a culinary professor at San Diego Mesa College, considers a true chef-to-table restaurant one in which the chefs are involved in all aspects of food creation—they’re sourcing the food locally, designing the menu, cooking, and serving. 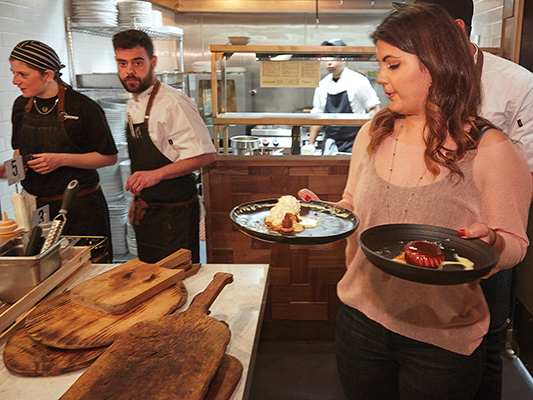 Dalila Ercolani, co-owner of Maestoso, brings dishes from the kitchen to the dining area.

“I want to say 75 percent of the restaurants that are chef-to-table chefs aren’t serving their own food. That’s kind of a new concept based on California law,” said Whitfield.

California law states that tips can only be given to those that have direct contact with guests or in the chain of service that has a relationship to the customers’ experience.

Maestoso says that he and the other chefs are also involved with duties like sourcing and designing a menu. He says he tries to source a lot of their products locally but some specialty Italian products such as the wines and flour are imported.

The restaurant has both an open kitchen — viewable to guests — in addition to a back kitchen area. Patrons can sit at a long wooden bar to watch chefs make pastas, a Roman ancestor of pizza called pinsa, and desserts by hand. Chefs deliver dishes to tables and describe the ingredients to patrons. It’s a casual yet trendy dining space with wood and copper accents, a wall displaying wines, and soft music playing over a sound system.

The diner’s menu is a mix of Roman dishes and novel concepts. Some items served are build your own pasta options, beef tartare, cherry pork tenderloin, Italian wines, and San Diego beers.

Instead of bussers, chefs will be assisted by what Maestoso calls “super bussers.” They’ll take on tasks beyond the typical role of a busser, including bringing guests their check, taking orders, and pouring wine.

Although there aren’t any typical waiters, Maestoso says this business model doesn’t call for fewer staff members than a non-chef-to-table restaurant. At peak times, the restaurant will have about 14-16 staffers.

“All employees will be full time employees and professionally trained both front of house and, especially, back of house,” says Maestoso. “One may argue that normally servers work less hours than chefs. This is true, but we are planning on utilizing those hours for different purposes related to the business.”

The Maestoso chefs are on a rotating schedule — some days they’ll focus on back of the house duties and some days front of the house. There are occasional “stationary chefs” walking around and serving “passagi” on a cart to the guests much like dim sum. The “passagi,” meaning “to pass by” in Italian, are a rotating offering of off-menu dishes.