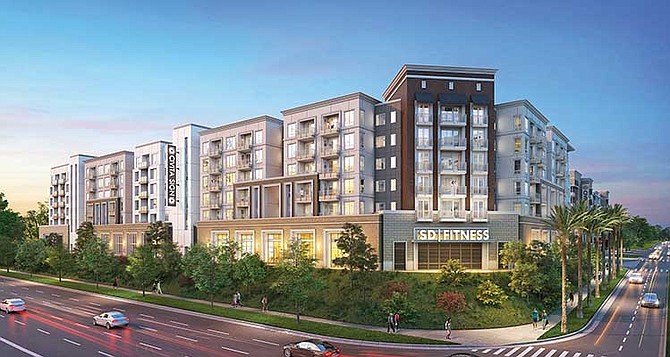 The two buildings in the $137.5 million complex are at Civita Boulevard and Via Alta. It will include 37,000 square-feet of ground-floor retail space and seven floors of apartments.

Construction is scheduled to start in April and finish in mid-2020.

The new complex — Siena Apartments for seniors and Stylus Apartments for families — will bring to 456 the total number of affordable apartments at Civita, a 230-acre community master-planned by Sudberry.

The Civita complex is among several affordable housing projects in the works or planned in San Diego County, including renovation of Luther Tower in downtown San Diego by DAL Development and The Rahd Group; a new seven story apartment building by Affirmed Housing in East Village at 17th and G streets; renovation of a former Motel 6 at 4370 Alvarado Canyon Road and construction of new apartments at Twain Avenue and Fairmont Avenue, both also by Affirmed Housing, and a Normal Heights apartment complex for homeless veterans by Chelsea Investment Corp.

Sudberry Properties will own and manage the retail portion of the project, with tenants still to be announced.

Chelsea Investment Corp. is developing and will manage the new apartments. Chelsea also developed and manages the Versa, Sudberry’s first affordable apartment complex for seniors 55 and over in Civita. The 150-apartment Versa opened in March 2015.

“We are delighted to team up with Chelsea Investment Corp. on this project,” said Colton Sudberry, president of Sudberry Properties.

“They are an esteemed leader in affordable housing and have developed more than 9,000 affordable housing units at a cost of almost $2 billion,” Sudberry said. “Given that affordable and workforce housing is one of the most pressing needs in San Diego, we’re honored to make Civita part of the solution.”

The affordable housing in Civita is being built to meet city inclusionary housing rules, which require developers to dedicate 10 percent of the homes they build for housing affordable to people whose incomes are at or below 65 percent of the San Diego regions’ median income.

According to the federal Department of Housing and Urban Development (HUD), the 2018 annual median income in San Diego County is $79,300.

Siena Apartments for seniors will include one-bedroom and two-bedroom apartments with monthly rents expected to start at $500.

Stylus apartments will be designed for families earning between 50 percent and 60 percent of the area median income, with rents estimated to start at $965.

Affordable housing rents are set by the state.

The complexes will include three courtyards with picnic and barbecue areas, fitness equipment, and outdoor entertainment areas.

Siena and Stylus will each have a clubroom with a fully equipped kitchen.