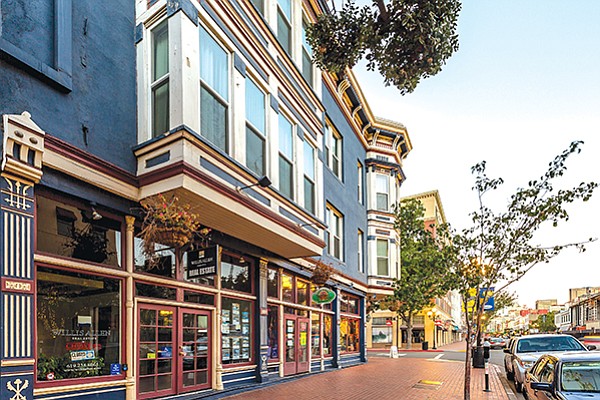 The Grand Pacific Hotel in San Diego’s Gaslamp Quarter will be remodeled as a restaurant and bar. Photos courtesy of CoStar

San Diego — Once a saloon, a brothel and a children’s hospital among its many incarnations, the Grand Pacific Hotel in San Diego’s Gaslamp Quarter may return to its roots in a way with a downtown developer who wants to turn it into a multistory restaurant and bar. 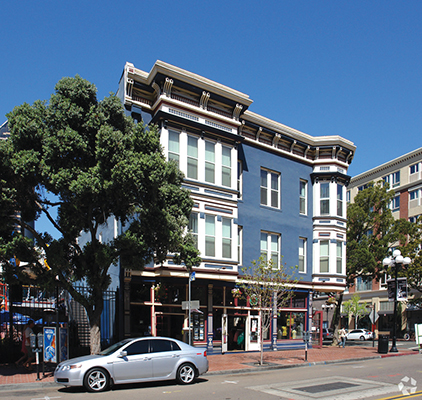 RMD Group has signed a long-term lease on the more than 100-year old building with HP Investors, which has owned the Grand Pacific since 2016.

The hope is to be open for business in early 2019.

“This is definitely our most ambitious project,” Georgopoulos said. “We’re moving really fast on something that generally can be really slow.”

RMD is the driving force behind Rustic Root, Ciro’s Pizzeria, Salvucci’s’s and Volcano Rabbit restaurants downtown, and FLUXX and Side Bar nightclubs.

“We’ve been working in these old buildings for the last 15 years, but none have had this history,” Georgopoulos said. “This has got the most opportunity to really make an impact and do some restoration or preservation.”

At this point, RMD’s plans for the Grand Pacific are pretty sketchy, beyond a general concept of making the first two floors a restaurant and bar with the third floor used as event space.

The hotel is now used for retail on the first floor with office space on the upper floors.

Looking Behind the Walls

Because of the age of the building, RMD won’t know for sure what it can do with it until structural engineers get inside and determine what repairs might be needed.

“There’s like three of four layers of wall,” Georgopoulos said. “Until you start peeling back the walls, you don’t really know what you’ll find.”

Ideally, Georgopoulos said they’ll find brick walls and steel columns, which could be left exposed as part of the remodeling.

No changes are planned for the exterior, other than repainting it a lighter color than the dark blue it is now, and adding lighting to show off the façade and improve lighting in the vicinity.

“Blue doesn’t take to light as some of the more opaque colors,” Georgopoulos said. “One of the things we’re thinking is this is a really good opportunity for lighting that corner with up-lighting the building.”

The Last of the Victorians

Built in 1887, the Grand Pacific is the only Victorian era downtown hotel remaining on its original site at 360 Fifth Ave. at the corner of Fifth Avenue and J Streets.

It is one of only three Gaslamp Quarter hotels to survive the aftermath Great Raid of November 1912, when the mayor at the time ordered the city’s many brothels closed in what was then San Diego’s red-light Stingaree District. A month after the Great Raid, the city tore down most of the hotels that were used as brothels.

Stingaree is a slang term for the barbed stingray fish that swam in San Diego Bay, and the term was applied to a district where some said you could be stung as a badly by lowlifes as you could by the fish in the bay

The other two hotels in the Stingaree to survive were the destruction that followed the Great Raid were the Horton Grand and the Brooklyn-Khale Saddlery, which were taken apart brick-by-brick in the 1980s to make way for Horton Plaza. They were reassembled into one hotel by Dan Pearson, a developer who also owned the Grand Pacific for a time.

When it opened, the Grand Pacific Hotel had several small shops on the street level with fine lodging on the upper floors, according to Sandee Wilhoit, an historian with the Gaslamp Foundation.

“It’s a really nice building and it’s surprisingly in pretty good condition,” Wilhoit said. “It’s one of the very few that really looks just like it did. It’s really intriguing and has so many nice features.”

Although she said she understands the thinking behind plans to use it as a restaurant and bar, “I would hate to see it torn up,” Wilhoit said.

At one point, the Grand Pacific was part brothel and part saloon as were many downtown hotels of the period, Wilhoit said.

“I don’t think it was a real high-class brothel,” Wilhoit said. “Back in the day, we had 120 saloons and it was sort of like one-stop entertainment, a saloon on the bottom and a brothel on top.”

The Grand Pacific also served as the city’s first children’s hospital, but by the time Pearson bought it, it had deteriorated. Pearson lived in the hotel for a year, and found it to be roach infested.

“Every morning when I woke up, the thousand bugs crawling around were not unfriendly, and they didn’t bite, but they were annoying,” said Pearson, who was a key player in the redevelopment that transformed the Stingaree into the Gaslamp Quarter.

Pearson said renovating the Grand Pacific as the RMD Group plans will be a challenge, but one he supports.

“It’s a great idea,” said Pearson, who owned the Grand Pacific for about 10 years in the 1980s. “That’s a beautiful building. You can’t get a better location.”

Pearson said that when he bought the Grand Pacific, he first thought of turning it into a restaurant and bar, similar to what the RMD proposes, but officials at the time weren’t keen on seeing another bar open in a district which they were hoping to reshape and shed the Stingaree reputation.

There also were cost-prohibitive structural issues that had to be addressed as part of any renovation, so Pearson left the building untouched.

“I have a sense that after all those years and the success of the Gaslamp Quarter, those structural improvements can be made more reasonably,” Pearson said.