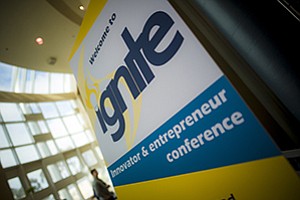 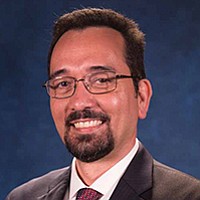 San Diego — Certain California universities have a reputation for churning out companies in addition to ground-breaking research.

Ruben Flores is on a mission to get UC San Diego mentioned first when collegiate entrepreneurship is discussed.

His hopes for the office are reflected clearly in its new name: Office of Innovation and Commercialization. But the office is undergoing more than a rebranding.

Flores, who until his move to UCSD had spent a significant portion of his career in private industry, has developed a slew of events and programs intended to encourage entrepreneurship on campus — and link university-based innovations with the regional entrepreneurship ecosystem.

Flores, who earned his doctorate in chemistry and biochemistry from UCLA, began his career at BD Biosciences Pharmingen, a San Diego-based biotech firm. He has also worked at Biosite (now Inverness), where he worked on clinical trials, Chemicon (now MilliporeSigma), where he managed research and development, clinical trials and marketing for diagnostic products.

Directly prior to joining UCSD, he was vice president of business development and technology transfer for the Los Angeles BioMedical Research Institute at Harbor UCLA Medical Center.

“Almost every academic center in the world has some form of office that tries to help in transforming the inventions, ideas and projects taking place there into products and services,” he said. “For 15 years we’ve had a Technology Transfer Office … It’s a name that has a lot of baggage.”

In the private sector, such offices have a reputation as lacking in business savvy, he said.

UCSD’s office tops the UC system in the number of licenses it issues and companies it spins off annually, Flores said. But that doesn’t mean there isn’t room for improvement.

“We revamped the process to make it similar, faster, no nonsense and open up the university as a platform for anybody in the community who wishes to explore ways in which they can become an entrepreneur,” he said.

Steps taken over the last couple years have included reducing the cost of using IP developed at the university; establishing the San Diego Innovation Council, a group of representatives from the region’s research universities and organizations working together to link external organizations with available resources; launching an entrepreneur-in-residence program; and hosting regular events, such as the Ignite conference and monthly talks by faculty on their latest research, to more-closely link the campus and the community.

The Ignite conference, which was a one day event in 2017, has been expanded this year to two days. The agenda includes interactive workshops and networking opportunities.

“It’s an open platform for anyone in the community to learn what entrepreneurship is all about,” Flores said.

UCSD’s efforts are part of a broader trend of increasing improvement in communication between academia and the private sector, according to the Milken Institute, a Santa Monica-based think tank.

“While industry energizes innovation through research and development (R&D) initiatives, the main catalyst that fuels knowledge-based growth once again lies where it started: the American research university,” the report said. “As new, bi-directional information exchanges open up between academic and industry researchers — as opposed to past linear models — more commercially attuned knowledge exchange is shared, leading to a rise in entrepreneurial success and economic impact.”

This process benefits regional economies the most as “knowledge spillover” from universities spurs the creation of technology-based clusters, the report said.

In fiscal year 2015, the latest data available at the time of the report’s publication, more than 1,000 firms were launched through TTOs at research universities, and more than 70 percent of startups were established in the same state as the university with which they were affiliated.

Who: Faculty, students, staff, and alumni from UC San Diego and regional universities; entrepreneurs; investors; members of the community.